It’s been rumored that Apple is going to discontinue the iPad 2. How does this affect you? Read on to learn more about this change in Apple’s line-up.

1. Likely to Be Discontinued

iPad 2 to be discontinued, amid burgeoning sales of newer models http://t.co/BgixYtzCeN

The iPad 2 originally launched in March of 2011, so its actually a bit surprising the device is still on the market. As you can see in Apple’s iPad comparison chart, the iPad 2 is quite slow compared to the iPad Mini or iPad Air. The iPad 2 runs on a dual-core A5 chip, while the iPad Mini and iPad Air both run on A7 chips.

This has been a long time coming. Way back in October of 2013, Geek published an article entitled “Why is Apple still selling the iPad 2?” If the iPad 2 seemed dated then, imagine how much more dated it is now, especially with recent additions to the tablet market like the Samsung Galaxy Note Pro.

2. Comparing the iPad 2 to Other iPads

this neatly sums up exactly how I feel on the matter of iPad mini vs. iPad Air http://t.co/m3oah6vsUi

While the iPad 2 has battery life comparable to the iPad Mini and iPad Air, the device has weaker video and photo capabilities. Instead of Bluetooth 4.0 (the standard in other iPad models), the iPad 2 runs Bluetooth 2.1 + EDR technology. In addition, the iPad 2 does not support Siri. Additionally, the iPad 2 only comes in 16GB, unlike the newer models which run in 16, 32, 64, and 128 GB flavors.

3. Schools and Business Liked the iPad 2

While some institutions were once buying up the iPad 2 at a rapid pace, that may no longer be the case. GottaBe Mobile writes:

“Apple has kept the iPad 2 around because the company claims that educational institutions and businesses are buying the older, cheaper tablet. However, that’s either not the case anymore, or Apple has decided to market its original iPad mini as the replacement for schools and businesses. We’ll have to wait and see as far as that’s concerned.”

Apple Insider notes that, especially for an older device, the iPad 2 remains quite popular.

“Apple was set to ship just 0.3 million iPad 2 units in the current quarter, suggesting…that the product is nearing end-of-life.

Still, after nearly three years on the market, the iPad 2 has been a smash success for Apple in its long stay on the market. One study published late last year suggested the iPad 2 remained the company’s most popular tablet in use, accounting for some 38 percent of units in the wild before the debut of the iPad Air and Retina iPad mini.”

If you already have an iPad 2, now might be a good time to trade it in. Amazon’s trade-in program is currently offering about $168 for 16GB Wi-Fi iPad 2 models.

If you’re a newcomer to the tablet market, grabbing an iPad 2 after they’ve been discontinued could mean a great bargain for you. The device currently retails for $399, but expect to see it priced considerably lower than that at online Mac retailers after the device is officially discontinued. 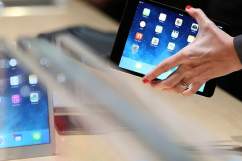 Read More
5 Fast Facts, Apple, iPad, Tablets
It's been rumored that Apple is going to discontinue the iPad 2. Here's what you should know.