The US Navy will soon commence testing of LaWS, a Laser Weapon System, aboard the USS Ponce. The weapon is pictured above. Testing is set to begin later this year. Here’s what we know about this big leap forward in weapons technology.

1. The Laser Will Undergo a 12-Month Trial

The US Navy is ready to deploy a futuristic weapon that's been likened to "Star Wars" http://t.co/KTXnz5WvdL

National Defense Magazine has reported that the laser weapon will be outfitted onto a Navy ship as part of a 12-month trial period. The magazine adds:

“The exact power level of the laser gun that will go on the Ponce is classified. Outside experts speculate that it is probably somewhere between 15 and 50 kilowatts…

The Navy started shooting down hard targets with megawatt chemical lasers in the 1980s, but these turned out to be impractical for shipboard use. Chemicals are undesirable on ships because of safety hazards and logistics requirements.”

2. The Weapon Will Be Deployed on the USS Ponce

The USS Ponce was originally commissioned in 1971. It has since been reconfigured to support mine countermeasure operations. In addition, the Ponce may act as a mission support vessel for Fifth Fleet operations in the Arabian Sea, Persian Gulf, Red Sea, or Indian Ocean.

3. The Laser Weapon Is Part of an $40 Million Project

Kratos Defense & Security Solutions was awarded an $11 million contract to work on LaWS. ABC News notes that the Navy has spent a total of $40 million on this laser weapon over the past six years. Despite the high costs of development, the energy costs for each pulse are quite low, reportedly “under a dollar.”

Fox News reports that these “Star Wars”-inspired laser weapons will be used to knock out aerial drones. The weapon could also target speed boats being used by enemy combatants.

The Bloomberg video above shows the laser weapon in action.

5. Israel May Have Something Similar

Israel is close to deploying a 'Star Wars' level of laser defense http://t.co/PsvPHDUyLW 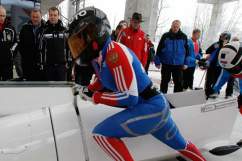