Nokia is expected to reveal their first Android phone later this month at the Mobile World Congress. The phone is code-named “Normandy” for now, but will likely be called “Nokia X” when it ships to consumers. Here’s what we know so far about Nokia’s first foray into the Android phone market.

According to The Verge, the Normandy phone is going to be a decidedly low-cost, low-tech affair. The phone’s specs include just 4GB of storage and 512MB of RAM. While this may make the phone less appealing to tech fans, the lower costs associated with this phone may make it a big seller among the budget-conscious, or among the less tech-crazed segments of the smartphone market (such as first-time smartphone buyers.)

The Wall Street Journal reports that Nokia is selling their handset business to Microsoft (a $7.4 billion deal that is nearly finalized.) So it comes as no surprise that Normandy will feel a bit like a Windows Phone. Normandy is expected to use a “forked” version of Android, similar to what Amazon did with the OS on Kindle. Microsoft services are likely to be worked right in to the Normandy interface, but this means the phone likely won’t have access to Google Play.

3. There’s a Big Market for Normandy

Why is #Nokia about to unveil an Android phone at MWC14? Check this graph. Here's the story: http://t.co/2JChNXjvjQ pic.twitter.com/IZ6300BbSd

In their report on Nokia’s first Android phone, Reuters notes that “79 percent of smartphones shipped worldwide last year ran on Android.” Given that piece of information, along with the fact that Windows Phones only made up about 4 percent of the smartphone market last year, and it’s clear that Nokia and Microsoft both have a lot to gain from Normandy.

If I were going to jump ship from iPhone, Nokia would be it. They were concerned with UX before it was a thing. http://t.co/YM5MeaG1Al

In her analysis of Normandy, ZDNet contributor Mary Jo Foley writes: “I’m starting to think that Normandy may not be the only Android/Windows Phone hybrid handset we see in 2014.”

If the Normandy sells well, it may start a trend of Android/Windows hybrids. And given Steve Wozniak’s recent comments to Wired that Apple should make an Android phone, maybe an Apple/Android hybrid could follow. 2014 could prove to be the year of the hybrid smartphone! 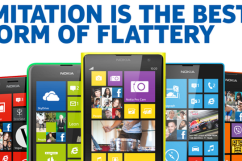