The Samsung Galaxy Note Pro is a brand-new tablet computer, available in 8.4, 10.1, and 12.2 inch varieties. The 32GB Note Pro tablets will retail between $399 and $749, depending on what size screen you choose (prices are slightly higher for the 64GB Note Pros.)

Not to be confused with the Samsung Galaxy Tab Pro, the Note Pro series will be bundled with a Samsung S Pen stylus.

1. CNET: “Samsung Is Doing Something That Feels Different”

Two instances of the same app, side by side. Better multi-tasking with #GALAXYNotePRO. pic.twitter.com/5ezLxg2hYd

CNET‘s review of the Note Pro line focused on the 12.2-inch model, which clocks in at 1.6 pounds. Arguing that a tablet of this size is best operated while laid flat on a desk, the review went on to praise features like Remote PC (allowing access to a computer anywhere in the world) and the ability to run four apps at once. However, the reviewer griped that “the interface isn’t the most intuitive.”

“I like premium tablets, and the NotePro’s specs speak to the side of me that gets excited about running benchmarks. These are Samsung tablets however, so they will not be cheap, but their success will depend on how consumers react to Magazine UX.

I do like that Samsung is doing something that feels different. It’s taking a chance with the new interface, and I’d honestly rather see that than just another Android tablet, regardless of its premium appeal.”

TechRadar‘s review focused on the user experience of the S Pen stylus. The reviewer wrote:

“The thin S Pen, while still feeling like cheap plastic, is actually a major upgrade in functionality over using your hands on the abnormally large screen. It’s also a cleaner experience that doesn’t get your grubby fingerprints all over the ultra-rich display.

Hovering over the screen with the stylus and pressing its single button brings up the half circle pen wheel. Samsung Galaxy Note 3 and Galaxy Note 10.1 2014 Edition users should be familiar with these five Air Commands.

Out of Active Memo, Scrapbook, Screen Write, S Finder and Pen Window, it was Pen Window that we found most useful on the large screen. That’s because we were able to open a ridiculous amount of windows without the tablet hardware skipping a beat.”

Note: This hands-on review was based on hands-on experiences with the tablet at CES, prior to the actual launch.

3. GSMArena: “This Is a Gamble for Samsung”

Enjoy enhanced multi-tasking experiences on #GALAXYNotePRO. Open up to four windows on one screen. pic.twitter.com/R0Do3EdWrY

Focusing on the Note Pro 12.2-inch model, GSMArena found that the largest Note Pro tablet did have some disadvantages. The size may simply be too large for some users, and the notification area doesn’t seem to make the best use of the larger screen. The reviewers also panned the devices “relatively poor” audio and video codec support, and disliked the fact that Air View only worked with the S pen, and not with thumbs.

All that being said, GSMArena still had some nice things to say about the tablet. In their conclusion, they wrote:

“The Samsung Galaxy Note Pro 12.2 is to most Android tablets what the Galaxy Note was to phones when the term “phablet” was not even coined yet. One’s first reaction is “it’s huge” but then after using it for a while other devices just seem too small.

Samsung would love to have the business tablet – BlackBerry’s PlayBook failed, the HP TouchPad failed, leaving the Apple iPad as the de facto business tablet. So far most Android slates were okay personal devices but turned no heads at the office.

The tide could be turning – the Galaxy Note Pro 12.2 is nearly the size of an ultrabook and it has the processing power of some of the earlier models. The change in screen size seems trivial on paper but it’s a nearly 50% increase in surface area and almost enough to fit an A4 page at 100%.

The difference when working with documents is tangible, but the advantages of a larger screen extend to multitasking too. The latest incarnation of Multi-window allows for a fluid workflow similar to desktop experience.”

Is the #Samsung Galaxy Note Pro worth $150 more than the #iPad Get all the facts before you decide: http://t.co/EUlVoUUN4x @TechMeme

LAPTOP has an interesting article comparing the features of the Samsung Galaxy Note Pro to the iPad Air, and it’s a must-read for anyone who can’t decide if the Note Pro is really worth the extra $150.

While the author argues that “the new Note certainly has the iPad Air beat when it comes to multitasking and pen integration,” the article also notes that the iOS 7 interface is “not nearly as customizable.”

“The Galaxy Note Pro also takes multitasking to the next level with Multi Window. Now you can run four apps on the screen at one time, and you can drag and drop content between Windows. Samsung even says you’ll be able to quickly launch your frequently used Multi Window app configurations. The iPad can’t run more than one app at a time, although iOS 7 at least makes it simple to switch between apps…

For aiding text entry, Samsung has revamped its on-screen touch keyboard to closely mirror a traditional laptop, complete with arrow keys and familiar shortcuts like cut and paste. Not good enough? Samsung has partnered with Logitech, Belkin and Zagg to create Bluetooth keyboard cases for this large tablet.”

5. MobileLinuxNews: “This Screen is Absolutely Gorgeous”

On YouTube, MobileLinuxNews has put together an in-depth unboxing and hands-on review of the Samsung Galaxy Note Pro 12.2. The video (embedded above) is over 15 minutes long, but it is well worth watching if you’re considering this tablet.

Being able to see a person interact with the screen is a big help for potential buyers. It’s especially helpful to see how easy it is to not only launch multiple applications, but also to see how easily each app’s screen area can be customized. Seeing the widget apps being launched and then moved around the screen is very cool as well.

In the video, the reviewer notes:

“If you’re looking for a top-end tablet, if you’ve got the money, this is the thing…It’s down to how much media you really consume…This is a big device, and it is beautiful.” 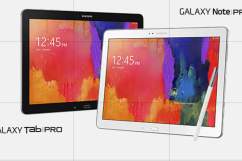