While the model pictured above at a recent Samsung Galaxy event may be holding the latest and greatest smartphone, that will change in just a couple of weeks. It’s been rumored that the Samsung Galaxy S5 will debut on February 24. Here are some of the most intriguing rumors we’ve heard about the launch.

The device is likely to debut at the Mobile World Congress in Barcelona later this month. While noting that it is often difficult to separate outlandish rumors from likely facts, TIME predicts that the Galaxy S5 is likely to boast a 16 megapixel rear camera. This is a step up from the S4’s 13 megapixel camera, and will likely mean the phone is capable of better capturing images in low-light conditions.

As for the front-facing camera, it will likely clock in between 2 and 3.2 megapixels.

Has Samsung embedded a fingerprint sensor beneath the touchscreen on the Galaxy S5? http://t.co/VasCfBjzT2 #biometrics

Complex is betting that the Samsung Galaxy S5 will offer some kind of biometric ID system, similar to Apple’s Touch ID offering for the iPhone 5S. While an iris scanner had been rumored previously, a fingerprint scanner seems more likely at this junction.

The Daily Mail reports that the S5 will come in two flavors: an all-metal design, or a design with a plastic case, with the plastic model being about $200 cheaper.

Which Samsung Galaxy S5 rumor do you most hope is real? Barely ahead in our poll: rapid-charging battery http://t.co/Mh872LuGMI

CNET reports that one cool feature the Galaxy S5 might boast is super-fast charging. They write:

“Smartphone battery life is a big recurring complaint these days. If this rumor pans out, the S5 would have a 20 percent greater capacity in the same footprint as its predecessor, and it would also charge up in less than two hours.” 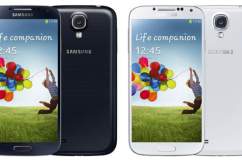