The Samsung Galaxy S5 smartphone features a ton of cutting edge features. Not sure if you want to buy one when it comes out on April 11? We’ve collected 5 must-read reviews to help you make up your mind.

Samsung Galaxy S5 vs. the competition: How does it stack up? http://t.co/7RBKUZb5hN pic.twitter.com/dVye89qqvz

Business Insider put together a gallery of the phone as they played around with it. A lot of time at the Samsung Unpacked event was spent talking about the unique perforated texture on the case of this phone, and BI helpfully explains a bit more about what that texture feels like. Calling the back casing “rubbery,” they add that the back snaps right off so you can add more storage with an SD card. Praising the “thin and light” design of the phone, they also said there were too many camera modes to list, making this a great buy for the photo-obsessed.

ZDNet went hands-on with the S5, and had a lot to say. They praised the phone’s top of the line features and “powerful punch” when it comes to the hardware.

ZDNet talked at length about the S5’s fingerprint scanner:

It not only unlocks the phone, but can also be used to make mobile payments — something Apple has come close to with its App Store integration, but not much further. In partnership with PayPal, Galaxy S5 users can authorize mobile payments with a touch of an enrolled finger.”

Pocket Lint focused a large chunk of their review on the Galaxy S5’s fitness features. They write:

“The pedometer and calorie tracking information is still there but now a physical heart rate sensor is also included.

The heart rate scanner is located on the back of the device where your index finger naturally sits. Hold for a few seconds and it will show your heart rate on the screen in a pulsing line before giving you an accurate readout of your current state. Great for regular updates, but not ideal for tracking while in training.

Combined with the Gear 2 or Gear Fit we can see the appeal but having it on the S5 alone feels like a bit of a for-the-sake-of-it extra. It works very well though.”

They also praised the comfortable feel of the phone in one’s hand, as well as the zippy camera features.

Samsung says you can take Galaxy S5 in the tub, shower or rain — but that it's water resistant & not water proof. http://t.co/5NOFuxjVmu

CNET‘s Editor’s Take on the Samsung Galaxy S5 was mixed. While CNET liked many of the features, they argued that the phone had perhaps been a bit over-hyped.

CNET sums it up:

“Metal body design? Nope. Eye-wateringly crisp 2K+ display? Nuh-uh. Overhauled Android interface? Only a little. After all the rumors and hype, the Samsung Galaxy S5 revealed with much fanfare at Mobile World Congress is more an iteration on the Galaxy S line than the fresh, whiz-bang package we’d all come to hope for and even expect.

Yes, it has a fingerprint scanner, and a heart rate sensor, too, not to mention Android 4.4 KitKat and a roster of muscular specs. From what I’ve seen, the Galaxy S5 shapes up to be an excellent device that will keep Samsung at or near the top of the smartphone heap. Yet the been-there, done-that design isn’t novel enough to trample rivals the way Samsung might hope.

Samsung still has a ways to go to reinspire jaded followers and fans, and those who value luxury materials and crafted designs over Samsung’s stamped-out phones should keep the door open for Apple’s iPhone 6 and HTC’s forthcoming sequel to the beautiful HTC One.”

Interested in comparing the Samsung Galaxy S5 against its predecessors? Look no further: http://t.co/Pv4f3asg36 pic.twitter.com/3TNDxPpvET

The Telegraph‘s Matt Warman writes that the device “feels…as though it’s cheaper than the price tag deserves.” To be fair, Samsung has yet to release pricing info for the new phone.

That being said, Warman gave the Galaxy S5 high marks for its “remarkable” screen quality and the sense of “family” that the Galaxy S5 has when used with Galaxy Gear fitness products.

“Samsung’s explicit aim has been to improve on the S4, rather than to revolutionise it. The features such as the camera, the battery life and durability matter above all else, the company believes.

It makes a change from a laundry list of irrelevant feature improvements, but above all the S5 is a major hardware upgrade masquerading as a minor update.” 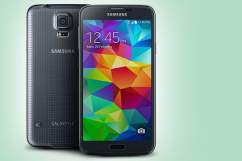