Samsung has not one, but two successors to their original Galaxy Gear smartwatch. The Gear 2 and Gear 2 Neo are quite similar in terms of features and design. The Gear 2 Neo is ever-so-slightly sleeker, made from plastic instead of metal like the Gear 2, and lacks the camera of the Gear 2.

Both are water-resistant and offer 4GB of internal storage. Before you buy one of these smartwatches, check out these must-read reviews.

The IGN video above goes in-depth about what’s new with these two smartwatches.

IGN‘s review of the Gear 2 and Gear 2 Neo focused on comfort and style. The review praised the more comfortable fit of the Gear 2 compared to the original Gear model, as well as the ability to swap out straps to suit your mood.

“What we can tell you is that the Gear 2 and Gear 2 Neo, now running Tizen instead of Android, are significantly faster and more responsive than the original Gear, though the switch to Tizen isn’t the most earth-shattering alteration, as the aesthetics remain largely similar. The Gear 2’s heart rate monitor provided a speedy reading…the pedometer worked well, and switching between apps and navigating to the home screen was relatively painless.”

Samsung's Gear 2 Neo is slightly lighter and does away with the camera of the Gear 2. http://t.co/xXuJhV27BZ @CNET pic.twitter.com/gq3kEueFuP

PC Pro‘s review claims that the Gear 2 is more responsive than the first Gear. However, the review states that the watch will be too expensive for the average consumer, especially because it requires a Samsung phone to get the most out of your watch experience.

“The reduction in the size of the watch also means the battery is smaller than before – but critically, Samsung is claiming a threefold improvement in battery life, from one day to three, presumably thanks to the increased efficiency of the Tizen OS. We can’t vouch for the accuracy of that claim just yet, and although it’s a welcome boost, having to charge your watch every three days is still an inconvenience.”

Wondering if the switch from Android to Tizen will change how the Galaxy Gears work with Samsung smartphones. http://t.co/AVAta3QOtg

Trusted Reviews writes that the Gear 2 lineup is an improvement over the Gear, but that the watches could still be improved upon even more. They sum up their review by saying:

“We’re still in the early stages of getting nearer to a ‘mainsteam’ smartwatch that the masses will get on-board with. The Gear 2 seems a lot better than the Galaxy Gear, but it is an iterative improvement. And until a manufacturer cracks the formula, sport-based watches feel more in-tune with their audience.”

4. GSMArena: Straps Have a ‘Nice’ Texture

In their review, GSMArena writes that some of the biggest changes to the Gear lineup have to do with comfort and design. They note:

“The Gear 2 and Gear 2 Neo come with exchangeable straps in varying colors – both Samsung-made wrist straps and third-party options will be available. The smartwatch bodies themselves available in a number of paint jobs, there’s plenty of potential for mixing and matching. The straps have a nice rubber texture feel to them, while the watch itself fits nicely on the wrist. The wrist strap has been stripped of controls – the camera on the Gear 2 has been moved to the body, as have the IR blaster and the microphone.”

5. Digital Trends: ‘The Best Screens on a Smartwatch’

Digital Trends writes that while the bezels and watch face still seem “bulky,” the screens are some of the best available on any smartwatch. The review praised the thinner profile and useful heart rate monitor on the Gear 2 line.

Digital Trends sums up their Gear 2 and Gear 2 Neo review by stating:

“We walked away from our time with the Gear 2 Neo and Gear 2 smartwatches feeling like Samsung has improved on the company’s original smartwatch in several significant ways. But we’re still far from convinced that either device will be a breakout hit in the burgeoning wearable space, unless perhaps Samsung is very aggressive with their as-yet-unannounced pricing.

The biggest hurdle is compatibility. The new devices are said to work with “several” recent Samsung smartphones and tablets. But as many of those phones as Samsung has (or will) sell, it’s still far from significantly dominating the mobile device market. That gives a device like the Pebble Steel, which works with both Android and iOS devices, a much larger potential audience…

And it’s unclear how much moving to the Tizen OS and away from Android will hinder app development. Samsung says they’re making the new Gears’ SDK available for developers. But unless it’s dead-simple to port Android-based apps over to Tizen (they are both based on Linux), it seems unlikely that developers will flock to create apps for an OS that, at the moment at least, only runs on a couple of smartwatches that are successors to a device that even Samsung would be hard-pressed to call an major success.” 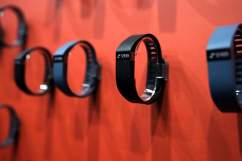