The Samsung Gear Fit is a lightweight fitness tracker coming to stores this spring. This new device is already on the top of many techie wish lists. Here’s a quick primer to introduce you to the benefits of this fitness band.

The Samsung Gear Fit will hit stores on April 11. TechCrunch notes that, depending on the price, this could be a big hit for Samsung. They note: “If the Fit was priced under $200, say, $179 or $149, Samsung could have a big hit on its hands.”

UPDATE: The Verge reports that the Gear 2 and Gear fit will retail for $299 and $199, respectively.

Both watches will sync with the upcoming Galaxy S5 smartphone, which is also expected to drop on April 11. The Galaxy S5 will cost $199.99 with a two-year contract.

What I like about the Gear Fit is I could imagine wearing it AND a regular watch http://t.co/9MIisyVkF4 http://t.co/3y05MqaOoQ

Samsung Gear Fit looks really nice. So why exactly do we need the Gear 2 and Gear Neo?

CNET went hands-on with the Gear Fit, and praised the device for being comfortable and adhering to the curve of a person’s wrist.

“The Gear Fit sits comfortably against your wrist, with the curved design holding snug against your skin — which itself is important to maintain good contact for the constant heart rate monitoring feature. It doesn’t feel strange or uncomfortable, and the curved screen also ensures the design feels well conformed to its function.”

Resistant to both dust and water damage, the Samsung Gear Fit can be worn in a variety of situations without fear of damage. The device monitors steps, sleep quality, and heart rate, so you can wear the Gear Fit in all kinds of indoor and outdoor weather conditions.

CNET has the product specs, as well as the lowdown on battery life. They write: 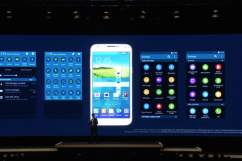 Samsung Galaxy S5: The Top 5 Reviews You Need to Read