See if your favorite Android racing game made it onto our Top 5 Best Android Racing Games of February 2014.

Angry Birds Go! is a free-to-play kart racing game by Rovio Entertainment, and the newest installment in the Angry Birds line of games. Players will be thrown into Piggy Island, which is the first colorful 3D world in the Angry Birds game series. During each race, players can collect coins to purchase vehicle upgrades, and use power boosts to speed ahead of your opponents. Coins can be used to purchase upgrades to top speed, acceleration, handling, and strength. Players collect crystals after the end of each race, which are used to unlock more tracks.Because of its fun, addicting, and familiar gameplay, fans of the Angry Birds game series or kart racers in general can easily fall in love with Angry Birds Go! You can download Angry Birds Go! Android app from the Google Play Store here. 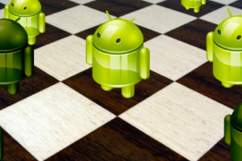