The popular messaging app WhatsApp is making headlines again as it becomes the latest acquisition of the app-hungry Facebook.

Here is what you need to know about this wold-famous app and the monster deal that acquired it:

Today Facebook issued a press release stating that the social networking empire would be purchasing WhatsApp for $16 billion.

According to Forbes, the deal breaks down to $4 billion in cash and $12 billion in Facebook shares. This total does not include the additional $3 billion in restricted stock that will be released to WhatApp employees after four years.

The total means that Facebook values each of WhatsApp’s users as being worth around $42.

Facebook’s decision to buy the company comes only months after a failed attempt to buy popular image-sending app Snapchat for $4 billion.

2. It Allows Instant Messaging Between Platforms

Unlike the other popular messaging programs like iChat, Gchat or Black Berry Messaging, WhatsApp is a singular app that allows people to send real-time instant messaging between phones regardless of their operating system.

Like Skype, this app also allows people to use the Internet, rather than cell phone service, so that users can text message people in different countries.

WhatsApp users in Germany from October 2012 to January 2014. (wikimedia commons)

Up to 70 percent of the company’s 450 million users use the app every day.

4. It Was Founded by CEO Jan Koum & Brian Acton

WhatsApp was founded by 38-year-old Jan Koum and 42-year-old Brian Acton. As part of the deal, Koum, who is currently serving as the CEO of WhatsApp, will join the Facebook Board of Directors.

5. There Are Concerns About Its Security

Due to WhatsApp’s access to a users’ entire contact list, the app has been called a valuable target for hackers. The company continues to rely on Open Sourcing in order to allow programers to fix bugs and improve security. 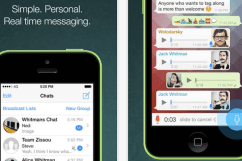