King.com, the makers of Candy Crush, are getting ready for their IPO. We previously reported that the IPO for King would be $500 million. However, new info has come to light.

TechCrunch is reporting that the IPO has been updated to $533 million. TechCrunch reports that King has priced 22.2 million shares between $21 and $24.

This IPO will raise the company’s value to $7.6 billion.

King is expected to trade as “KING” on the New York Stock Exchange when it goes public.

Are you going to buy stocks in the Candy Crush maker, or is this stock doomed to be DOA? 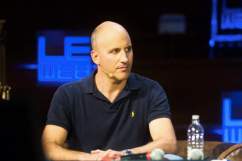