That HUVr Tech video with a “real” hoverboard was a hoax, and the people at Funny or Die were behind it. Here’s what you need to know.

Funny or Die has put up a video with Christopher Lloyd on their website where they admit that hoverboards are not real. You can see the video above.

“If we inspired one person to get into the hover sciences, I consider that a victory,” Lloyd says in the video, after apologizing for the hoax.

Musician Best Coast previously stated she was working with HUVr on her website, but has since posted a Twitter update that admits it was a hoax.

It seems that for some celebs, the benefit of participating in the hoax was press for their new projects. For example, Terrell Owens just happens to have recently released an app, while Schoolboy Q just released his third studio album. Both celebs likely got a big boost in people searching their names due to their participation in the HUVr video.

3. Fans Are Angry About the Hover Hoax

Many people have taken to Twitter and Facebook to share their anger in the wake of the hoax. Because the video claimed that HUVr Tech was real, many people got taken in by the joke. Apparently, the number of people who seriously want a hoverboard is higher than we ever thought.

4. Funny or Die Spent a Lot of Money on HUVr

IGN wrote an article called “Someone Spent a Lot of Money Making Fake Hoverboards.” It’s not clear what the budget was for this video, nor how Funny or Die will recoup its investment. Between hiring actors and stunt experts, along with making believable hoverboard props…this was an expensive joke.

5. We Finally Know Who HUVr Guy Is: Nelson Cheng

One of the only unfamiliar faces in the HUVr video was “HUVr Guy,” the blue-shirted man who seemed to be running the show and talking about the tech specs of the board. UPROXX reports that he is actor Nelson Cheng.

According to his website, Cheng is no stranger to fake commercials. Cheng previously appeared on a fake infomercial for Adult Swim. You can watch Cheng in the video above. 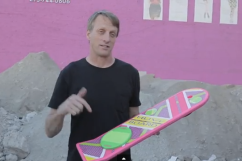