ABC’s “Agents of SHIELD” is a ratings smash. This spin-off from the Marvel Cinematic Universe centers around a group of SHIELD agents with an arsenal of high-tech weapons.

But just how realistic are the weapons and gadgets featured on the show? Here’s a rundown of the feasibility of the show’s coolest tech items.

In the very first episode of Marvel’s Agents of SHIELD, we were introduced to FitzSimmon’s squadron of forensic drones. These drones were named after the 7 Dwarfs, boasting names like Happy, Doc, and Grumpy. These D.W.A.R.F. (Drones Wirelessly Automated to Retrieve Forensics) drones are used for various purposes on the show, most notably to scan for visual information and collect data. One D.W.A.R.F. is capable of smelling a room, while another scans for radiation.

Using these types of small, forensic drones to solve mysteries is actually quite realistic. Australian law enforcement officials already use drones to investigate crime scenes. According to the Australian Broadcasting Corporation, unmanned drones were recently used to search for the body of a murder victim.

While most of us spend our days strapped to desks with boring computers, the SHIELD team on The Bus gets to use this sophisticated holographic interface. Tony Stark uses similar tech in the “Iron Man” films.

In the comics, Deathlok is a cyborg who was brought back to life using advanced technology. While nobody has the technology to bring a person back from the dead (except in cases where the heart only stops briefly), cyborg technology may not be as far-fetched as you think.

The Guardian reports that there are a number of scientists working on cyborg technology. While their experiments are limited to insects for now, it may not be much longer before human test subjects are used.

One of the coolest pieces of tech on “Agents of SHIELD” is Coulson’s beloved Lola, a Corvette that’s been modified with hover technology from Stark Industries. In addition to flight capabilities, she also has GPS and flamethrowers.

A Massachusetts-based company called Terrafugia is actually making flying cars. Like Lola, these cars are capable of vertical take-offs. But as cool as a flying car would be, even a Terrafugia vehicle isn’t as sexy as a cherry red Corvette.

While “Agents of SHIELD” star Clark Gregg might be wearing glasses in the photo above, it was his co-star Brett Dalton who donned a pair of black “nerd glasses” in the episode “Eye-Spy.” In the show, these “backscatter glasses” allowed Agent Ward to see through walls, as well as to receive visual messages.

How realistic is this technology? Well, CNN reports that Google Glass will be compatible with regular prescription lenses, allowing messages to be received using the interface. That being said, the Google Glass interface, when applied to regular glasses frames, doesn’t quite have the same inconspicuous look as Agent Ward’s frames.

As for the x-ray spec capability of these futuristic glasses, it’s not totally impossible. Currently, backscatter x-ray tech is used in full body scanners at airports. However, these massive units aren’t compact enough to fit into a pair of glasses. For now, these high-tech specs are just a pipe dream. 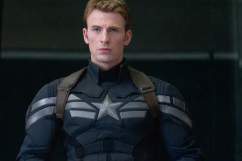