The all-new HTC One M8 is available now. Before you dash down to your mobile carrier to pick up this new phone, make sure you’ve read these insightful reviews.

1. The Verge: ‘Does Everything a Phone Should’

The Verge‘s David Pierce has written a comprehensive review of the new HTC One M8. The review praised the device for having zero performance issues, but questioned the quality of the phone’s duo camera design.

“The One really only has one major flaw left, and it’s a big one: its camera is still pretty bad. It’s the same UltraPixel camera HTC debuted last year, which trades resolution for pixel size so as to collect more light at a time. The idea is certainly sound, but the execution was wrong then and it’s wrong now. And the changes it did make are either niche features or interface changes attempting to disguise the device’s basic shortcomings…

I desperately wish it took better pictures, and I’m reluctant to buy or recommend it until it does, but I like absolutely else. It’s fast, long-lasting, does everything a phone should, and does it all with totally unparalleled class and style. From motion gestures to the Dot View case, it has genuinely new, genuinely useful features.”

Fox News calls the M8 “the best Android phone the world has ever seen.” Praising the quality of the display and speakers, the review was critical of the “washed out” look of photos taken with the device’s camera.

“The last big software change I’ll draw attention to is one that I absolutely love: Extreme power saving, a drastic measure to squeeze as much as possible out of your battery. Enabling this mode lowers the brightness of the screen and displays a special screen that provides access to voice calling, texting and email, though automatic email downloading is turned off. Everything else, including background data, is disabled. According to HTC, a 5 percent charge will last 15 hours and a 100 percent will last a ridiculous two weeks.”

3. Engadget: ‘Great Phone, But No Longer a Game-Changer’

Engadget reviewed the M8, and argued that the phone was basically a victim of its own success: “it’s difficult to take our breath away twice in a row,” the reviewers argued.

That being said, the review praised the duo camera’s “cool tricks” and improved battery life. However, the reviewers still took issue with the UltraPixel camera tech, which overshadowed some of the good parts of the HTC One’s overall camera experience.

“The biggest problem with the M8 is that it doesn’t raise the bar much higher than it already is — and that’s going to make it difficult to stand apart from competing devices like the Galaxy S5. Yes, Samsung’s upcoming flagship is an iterative improvement as well, but for better or worse, the company will still sell millions of units while HTC’s success remains uncertain. Duo Camera is a clever new touch, but we also needed to see improvements to HTC’s UltraPixel tech; hardware that’s just as easy to hold as it is to admire; and other new features that show us the company is changing the game once again. Keeping that momentum going is the biggest challenge a smartphone maker can face, but we fear it’s the only way HTC can keep its head above the crowd.”

4. BGR: ‘The Smartphone That Changes Everything…Again’

BGR‘s review of the HTC One M8 was written by Zach Epstein. In the review, Epstein argues that the HTC One is a great smartphone, despite some issues.

Epstein has high praise for extreme power saving mode, which lets you keep your phone running for 15 hours on just a 5% charge. However, he did note that Sense TV, formerly known as HTC TV, is a bit sluggish.

Here’s Epstein’s conclusion about the M8:

“Overall, there is simply no mass-market Android phone that even approaches the new HTC One in terms of design and build quality.

The fit and finish are absolutely impeccable. The materials are perfect, the brushed finish on the gunmetal version I received to review is stunning, the feel of the phone is phenomenal, and the lines are gorgeous and deliberate.

If I was a designer at one of HTC’s rivals, I would be embarrassed right now. The HTC One (M8) is everything a smartphone should be.”

Miller explains his lukewarm reaction to the new One:

“Most phones stay in my pocket for one to three months, but the HTC One M7 has been my companion for a year. I have been testing out the new HTC One M8 for the past several days, but will not be purchasing one for myself for a couple of key reasons. It is a nice evolutionary improvement over last year’s model with improvements in a few key areas.

It is very difficult to launch a revolutionary smartphone today since it seems we have reached the limits of hardware technology and the form factor is fairly standard across all phones. Companies stand out today with some additional tweaks, such as Sony’s waterproof design, and their custom software enhancements. HTC’s Sense 6 definitely competes well in the software department and their hardware fit and finish is fantastic, but I wonder if that is enough for them at this time.

I didn’t pick up the new HTC One M8 and immediately think I must go out and buy it now, likely because of the additional height with an insignificant increase in usable display area and the use of the same resolution UltraPixel camera that now disappoints me. However, it is improved in a few areas over last year’s model and will satisfy those demanding a microSD card slot…”

Miller goes on to praise the improved BoomSound speakers, cool Dot View case, and motion launch gestures. However, the review was critical of the new HTC One’s UltraPixel approach to taking digital photos. 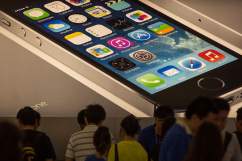 HTC One M8 vs. iPhone 5S: What’s the Best Smartphone?