Couric and Yahoo! News are inviting regular folks to help Katie with her interview through Tumblr. Here’s what you need to know about this cool interview.

The Bloomberg video above outlines Yahoo’s recent hire of Katie Couric as their “Global Anchor.”

Katie Couric has opened up her Tumblr page (katiecouric.tumblr.com) for users to submit their questions to Bloomberg. Users can use the “submit” button at the top of Couric’s Tumblr page to send their written questions, photos, or videos in for submission.

Below are two examples of questions that have been submitted by users:

“From Bob Petefish: Corruption
Ask him how he feels about crooked politicians and corrupt government officials? Would like a view from his perspective.

From Angel Rees: Banking reform
What reforms do you think are necessary for the banking industry in order to restore a solid foundation to our banking system so as not to repeat the mistakes of the past?”

The Couric-Bloomberg interview will be available on Yahoo! News this Friday.

A photo’s worth 1000 words. Have 1 u want @mikebloomberg to see? Send it & I’ll show him at our @yahoonews interview: http://t.co/OVMAKdMwmB

Couric’s interview with Bloomberg on March 14 will mark the former Mayor’s first sit-down interview since his appointment as the United Nations special envoy for cities and climate change. Couric’s Tumblr page notes that topics Bloomberg tackled while in office included gun control, smoking, and super-sized sodas.

.@KatieCouric is sitting down with @MikeBloomberg. What do you want to know? Submit your questions using #katiecouric.

Yahoo and Katie Couric’s big plan going forward to compete with the mainstream media is to rely heavily on crowdsourcing through various Yahoo! properties, including Tumblr and Flickr.

NY Daily News reports that Couric “plans to make her Yahoo interviews interactive by soliciting questions from viewers ahead of time and also asking viewers who they would like to see her interview.”

This interactive, crowdsourced approach is expected to help Yahoo! and Couric grow their viewership.

4. Katie Couric Is Not Yahoo’s Only Powerhouse Reporter

The video above outlines one analyst’s opinion of Yahoo’s hire of Katie Couric.

CNET reports that Yahoo! has recently hired a number of notable reporters to join their ranks, including tech reporter David Pogue. Matt Bai and Megan Liberman were also recently hired by Yahoo.

Prior to her Bloomberg interview, Katie Couric conducted a Yahoo! News interview with Former Defense Secretary Robert Gates. You can watch the full interview above. 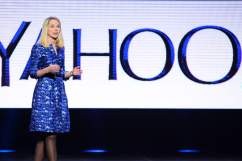