The new HTC One smartphone could be yours right now. Here’s everything you need to know about getting your hands on this hot Android device.

Want to learn more about the phone’s features? Check out our post on the new HTC One M8.

A call to our local Verizon store confirmed that Verizon will be selling the new HTC One M8 for $199.99 with a 2-year contract. Off-contract, the phone will be $599.99. The Verizon Edge plan for this phone would be $24.99/month.

HTC says that major carriers will stock the new HTC One within the “first few weeks of April,” with many carriers having the phones in stock before April 10.

Don’t want to wait that long? Starting March 25, at 1 PM Eastern, you can buy the phone online from AT&T, Sprint, or Verizon. You might have the new phone in your hands tomorrow if you select overnight shipping. Additionally, Verizon customers can walk into a Verizon store today and pick up a new HTC One.

HTC One (M8): Where and when it will be available in the US, UK and Canada http://t.co/ldMlZIqmOn by @nisummers

In total, 230 carriers around the world in 100+ countries will carry this phone. Many will have the phone in stock before the end of April.

All major carriers in US and Canada will carry the phone, including AT&T, T-Mobile, Sprint, and Verizon Wireless. 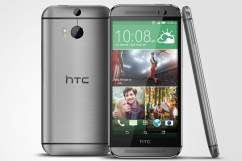 Read More
Android, Android Smartphones, HTC, HTC One, Smartphones
Here's everything you need to know about getting your hands on this hot Android device.