There’s a new HTC One on the horizon. The new HTC One will be officially unveiled on March 25. But that hasn’t stopped tech fans from speculating, rumor mongering, and gushing over the latest leaked images. Here’s what we know so far about this hotly anticipated smartphone.

Having a hard time tracking down info about this upcoming smartphone? That’s because it’s been referred to by at least half a dozen names on the blogosphere. The new-for-2014 HTC One model coming out later this year has been called by the following names: HTC M8, HTC One 2, HTC One+, HTC One Two, HTC Two, HTC One 2014, and the “All New HTC One.”

We know it won’t be called the M8 once it goes on sale, as that is just a production code word for the device. Many tech bloggers think that HTC One Two is too hard to say. The One+ or One 2014 seem to be the most likely monikers for this new phone.

The all new HTC One, for AT&T. pic.twitter.com/hDgqEYc693

One thing that has photography fans really excited about the new HTC One is the camera. It is rumored that the phone will have two cameras, each clocking in at 5MP. What’s more exciting, however, is what those cameras will be able to do.

HTC showcases the metal unibody construction of their current HTC One phone, and then states that the next HTC One will have the same sleek-yet-rugged construction, albeit with an even slimmer profile.

CNET UK says that the new HTC One will have the following specs:

“…the new HTC One will have a 2.3GHz quad-core Qualcomm Snapdragon 800 chip, front- and rear-facing 5-megapixel cameras, NFC, and HTC’s BoomSound speakers. The 5-inch screen will have a resolution of 1,920×1,080 pixels, it’ll run Android KitKat, and come with 32GB memory.”

GigaOM notes that, based on a leaked video that has since been taken down, it appears that the new HTC One has moved the control buttons from the bezel to an onscreen system. The phone also appears to have a microSD card slot, which the first One did not.

Other cool features unique to the phone are likely to be outlined at the official HTC launch event later this month. 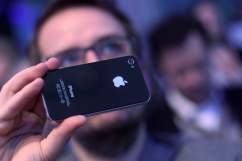