The new HTC One smartphone is here. Here’s everything you need to know about the price and special features of this new phone.

The new HTC One will retail for $600 off-contract, according to Phone Arena.

A call to our local Verizon store confirmed that Verizon will be selling the new HTC One M8 for $199.99 with a 2-year contract. Off-contract, the phone will be $599.99. The Verizon Edge plan for this phone would be $24.99/month.

The new HTC One has a “duo camera,” which enables the phone to take more lush, attractive images. The duo camera automatically knows what parts of an image are in the foreground, and what are far away. HTC’s camera take 300 milliseconds to focus, and their “ultrapixel” camera technology makes taking great pictures even easier than before.

When shooting video, you can pause, reframe your shot, and then continue shooting. HD Slow-mo video is now also supported.

The redesigned gallery in the new HTC One makes it easier to find photos you have taken in the past, or create custom photo galleries that feature your favorite friends.

The new HTC One offers a 5MP, wide-angle front camera, making this phone great for selfies or videoconferencing.

The new HTC One boasts a 5-inch screen, a Snapdragon 801 processor, and a MicroSD card slot. HTC says they will keep the phone updated with the latest versions of Android and Sense for at least two years.

The new HTC One has 40% improved battery life over the previous model. There is also a manual power-saving mode to help you manage battery life on the go. The phone will keep a charge for 2 weeks in standby mode.

Durable, beautiful, high-quality metal construction makes the new HTC phone feel expensive and premium when you hold it in your hand. 90% of this phone is metal, compared to about 70% in the previous HTC One model.

In addition, the dot matrix “Dot View” case on the phone lets you see who is calling, check the time, or see weather conditions. It’s like a smart Lite Brite on the back of your phone.

The new phone runs on Sense 6, a HTC software suite that modifies the typical Android UI. This makes it easy to find what you’re looking for. HTC is working with partners like Foursquare and Fitbit to integrate content into HTC users’ BlinkFeed streams.

There are also intuitive, gesture-based controls that let you check info on your phone without having to unlock the screen. Answering the phone or checking the time can be done with ease, even if your hands are full. 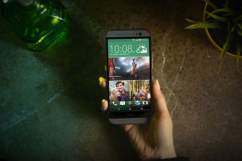