We’re getting closer to the official launch of the Oculus Rift. Here’s our up-to-date guide to this futuristic VR headset.

The new version of the Oculus Rift has a bunch of improved specs. The Oculus VR site lays out some of the improvements, which include precise positional tracking, a low persistence OLED display to reduce blur, and integration with the Unreal and Unity engines. The screen resolution is 960 x 1080 per eye.

Polygon adds that the new version of the Oculus Rift will also have an “added USB port and power connection so developers will be able to connect, and power, external hardware such as a front-facing camera or other peripherals.”

Oculus Rift may be the leading name in VR headsets, but that may not be true for long. Sony’s Project Morpheus headset has been in development for three years, and is designed to work with the PS4.

Neither Project Morpheus or the Oculus Rift have official public launch dates, yet. But given how many gamers already own a PS4, it’s likely that Oculus Rift will face some stiff competition from Sony.

Oculus Rift ParrotCoaster | STANDING UP IS A BAD IDEAIf you enjoyed the video, punch that LIKE button in the FACE! Subscribe for more great content : bit.ly/11KwHAM Share with your friends and add to your favourites it helps the channel grow more than anything :) Follow me on Twitter : bit.ly/12aPsmi Add me on Facebook : on.fb.me/1hhjZiM Game Link: riftenabled.com/admin/app/177 Outro Song created…2014-01-29T21:00:00Z

Even though Oculus Rift isn’t on store shelves yet, there are tons of gamers who already use and love their headset. One notable example of an Oculus Rift fanboy is YouTuber jacksepticeye, who has uploaded tons of play-through videos from his Oculus display.

You can see this gamer freak out about the Oculus Rift in the video above, where he tests out a roller coaster sim.

While a lot of the press surrounding Oculus Rift talks about the device’s implications for gaming, you can also use the headset to watch movies. Kotaku has a great post about the experience of watching a film on a VR headset. Kotaku notes that it is nice to be able to lie on one’s back to watch a movie, but complained about pixelation. Hopefully that pixelation has been dealt with in the improved Oculus Rift headset. 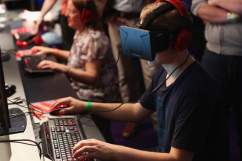