As you can see from the picture of last year’s crowd above, SXSW is a huge festival that draws a ton of visitors. The 2014 SXSW Festival will feature films, concerts, games, and tech events.

Whether you plan to be on the ground or following along at home, we’ve got the ultimate guide to what’s happening at this year’s SXSW Festival. Here are the crucial facts you need to know.

Above, Bruce Springsteen speaks at a past SXSW event.

SXSW consists of three main groups of events. SXSW Interactive is focused on tech and gaming, and will run from March 7-11.

SXSW Film focuses on film screenings and talks from industry insiders, and will run from March 7-15.

SXSW Music will feature concerts and live streaming events, and runs from March 11-16.

You can view the full SXSW 2014 schedule here.

The SXSW Festival takes place in Austin, Texas. The Festival is held once a year, usually in the Spring. SXSW has been running since 1987.

There are all kinds of awesome tech events at SXSW Interactive this year, including a keynote speech from Adam Savage.

One of the most anticipated events is NSA whistleblower Edward Snowden‘s video conference chat. He’ll be speaking via a remote feed from Russia, where he has been living since he was granted temporary asylum in August 2013. The event will be held on Monday, March 10.

Julian Assange will also be live streaming in for a conversation. His talk will be on March 8.

There will also be a Digital Creative Job Market, where tech insiders can connect with potential employers. Multiple tech luminaries will also be signing their books at SXSW, including James McQuivey (author of “Digital Disruption: Unleashing the Next Wave of Innovation”) and Jeff Gothelf (author of “Lean UX: Applying Lean Principles to Improve User Experience”).

Want more? Check out our list of the Top 5 tech events at SXSW this year.

Lena Dunham, pictured above, will be giving a keynote speech on Monday, March 10.

Some of the most interesting films being screened this year include “Beyond Clueless” (a doc about the “teen movie” genre), “Doc of the Dead” (a zombie documentary), and “A Wolf at the Door,” a film about a kidnapped child in Rio de Janiero.

You can browse the list of SXSW Film speakers here.

The big music news out of SXSW this year is that 50 Cent will headline a live-streaming musical showcase on March 11.

The outdoor stage at Butler Park will host several concerts, including sets from Los Lonely Boys, Foster the People, Washed Out, and Childish Gambino.

5. SXSW Has a Mobile App

Whether you want a guidebook while you’re wandering around the festival, or just want to keep tabs on SXSW from the comfort of your couch, you can use the official SXSW app, SXSW GO. It can be downloaded from the Apple App Store, or on Google Play. You can watch videos, listen to music, and connect with friends at the festival. The app is free to download. 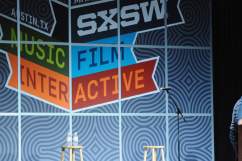 On the next page, we’ve got the dirt on SXSW secret events, gaming, and more…