Tim Berners-Lee is the man who invented the World Wide Web. As we prepare to celebrate the Web’s 25th anniversary, here are some facts about this fascinating man.

In the interview above, you can listen to Tim Berners-Lee talking about the World Wide Web.

As we discussed in our article about the Web turning 25, Tim Berners-Lee made history on March 12, 1989. On that date, he published a paper outlining what would eventually become the World Wide Web.

The next year, Berners-Lee realized that his original idea could be expanded upon. While he initially thought of the Web as something to foster communication between CERN employees, he soon saw the impact the Web could have if it went worldwide. Berners-Lee and Belgian computer scientist Robert Cailliau worked together on a new proposal in 1990. The first webpage went up in August of 1991, and can still be accessed here. The rest is history.

You can read the original proposal written by Berners-Lee and Cailliau here.

Today I took a stand against mass surveillance. Will you join me? https://t.co/ZrOMRolOKq #stopspying

Berners-Lee is active on Twitter. He is passionate about the power of the web, and many of his tweets support a free and open Internet. Below are a few more of his top tweets:

How to get all you big sister's passwords http://t.co/CpytKWH9aT and a disappointing reply from Chrome team.

This last one was written in the wake of Aaron Schwarz’s death:

4. Berners-Lee Is the Director of the World Wide Web Consortium

Berners-Lee Is the Director of the World Wide Web Consortium, or W3C. The goal of the W3C, according to their site, is to “lead the World Wide Web to its full potential by developing protocols and guidelines that ensure the long-term growth of the Web. ”

5. Computers Are In His Blood

“My parents are both mathematicians: they actually met while working on the Ferranti Mark I, the first computer sold commercially. My mother has been dubbed the ‘first commercial computer programmer’ as she went with the machine when it was installed on the customer site. So we played with 5 hole paper tape, and learned to enjoy mathematics wherever it cropped up, and learned that it cropped up everywhere.” 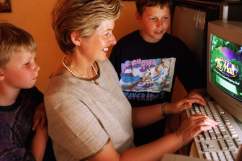 The World Wide Web Turns 25: We’ve Got 25 Fast Facts You Need to Know