In the video above, you can learn all about the upcoming wearables from Samsung. Both the Gear 2 smartwatch and the Gear Fit wristband will debut on April 11.

The Verge reports that the Gear 2 and Gear fit will retail for $299 and $199, respectively.

Both watches will sync with the upcoming Galaxy S5 smartphone, which is also expected to drop on April 11. The Galaxy S5 will cost $199.99 with a two-year contract.

The Gear 2 features a super AMOLED screen, 4GB of internal memory, and 512MB of RAM. The Gear Fit has a built-in heart rate sensor, and lets you play music or check messages/email. 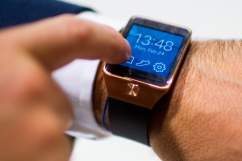