After appearing in the HUVr “real hoverboard” video earlier this week, Tony Hawk has now issued a video apology for his role in the prank. You can watch Tony’s apology in the video above.

“I thought it would be obvious that it was fake…to me, it was just a fun opportunity to ride in a DeLorean with Doc,” Hawk says in the apology video.

The video also shows real footage of the stunt harness in action.

Despite claims that the HUVr technology was real, it has since been revealed that Funny or Die was behind this viral prank video.

You can watch the original HUVr Tech video below.

Did you get fooled by this prank? Are you mad at Tony Hawk for taking part in the making of the HUVr video? 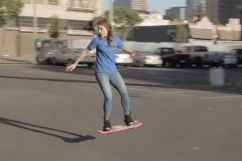 Funny or Die Is Behind Huvr Hoax: 5 Fast Facts You Need to Know