You’ve probably heard a lot about iBeacon in recent weeks. Between being adopted by major retailers like Macy’s and getting lots of use at SXSW, it’s clear that iBeacon is the wave of the future. But what, exactly, is iBeacon? Here’s everything you need to know about this Apple service.

1. iBeacon Is a Technology For iOS Devices

The Bloomberg video above calls iBeacon a “secret weapon” for retailers.

On their support page, Apple explains what iBeacon is and how it works:

“iBeacon is a new technology that extends Location Services in iOS. Your iOS device can alert apps when you approach or leave a location with an iBeacon. In addition to monitoring location, an app can estimate your proximity to an iBeacon (for example, a display or checkout counter in a retail store).”

2. iBeacon Is Big at SXSW

Mashable reports that iBeacon is really big at this year’s SXSW festival:

“iOS users who download the official SXSW app can take advantage of iBeacon in select sessions and when picking up their badges. For instance, when the user is in the vicinity of the SXSW registration area, the user will get a notification containing their Registration QuickCode.”

SXSW’s implementation of iBeacon is one of the first event uses of the iBeacon technology. It shows that the app could be used for more than just retail.

3. iBeacon Is Used at Macy’s & Other Retailers

Last Fall, Engadget reported that Macy’s was experimenting with location-specific discounts. You can see the Macy’s iBeacon in action in the video above.

Meanwhile, Mashable reports that Apple is also using iBeacon in their Apple Stores. iPhone users are tracked as they move around the store. Based on their movements in the store, customers were given info about their order status, or shown price comparisons between two different products.

MacRumors notes that American Eagle and Safeway have also experimented with iBeacon notifications.

The Bloomberg video above investigates the “creep factor” of iBeacon.

Yahoo! Finance reports that some people are concerned over the potential privacy violations that iBeacon might cause.

“Without knowing where the data is flowing and what is going to happen with it, consumers can’t make good decisions,” Jennifer Urban said in the Yahoo! piece. Urban is the co-director of the Samuelson Law, Technology & Public Policy Clinic at the University of California, Berkeley Law School.

Apple Keeps Turning Bluetooth On When You Update Your iPhone. Why? iBeacon's location marketing possibilities… http://t.co/DKEX1XMpEJ

“iPhone and iPad users are the majority of people shopping via mobile, and they usually spend more than Android users, too…Nearly one in three online shopping transactions is done on mobile…

The percentage of people who actually buy something after landing on a retail site is universally low, around 1%. But even so, iPhone conversion rates are 21% higher those of Android.” 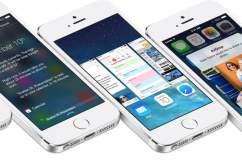