You can check out the Fire TV commercial starring Gary Busey in the video above.

Amazon has just announced their streaming box, which they call Fire TV. The Amazon Fire TV is available for purchase at Amazon.

Fire TV will enable users to stream media from all of the most popular set-top box channels, including Netflix, Pandora, Hulu Plus, Crackle, and Frequency. Facebook, Twitter, iHeartRadio, and Pandora will all be supported as well.

You can see a full list of supported apps and channels on Amazon’s official page for the Fire TV.

Amazon’s set-top box will also offer Amazon FreeTime, a service that lets you control what types of content your kids watch (and how long they can watch TV at a stretch.) This feature is “coming soon,” according to Amazon.

Fire TV is also a gaming console. The Fire TV game controller will cost an extra $40, on top of the price of the Fire TV itself.

Joystiq reports that Amazon Fire TV will support a number of games produced by Amazon, as well as games from other developers:

“Amazon announced a slate of games for its Android-powered Amazon Fire TV content streaming device, revealing that Fire TV-specific versions of Mojang’s Minecraft, Gameloft’s Asphalt 8, and Telltale Games’ The Walking Dead are due to launch for the platform shortly after its release. The company notes that gaming will serve as a “bonus” feature supplementing Fire TV’s video and music streaming capabilities.

Amazon additionally revealed Sev Zero, an internally developed, Fire TV-exclusive tower defense game that allows multiple players to join in using connected tablet devices. The company revealed that it has more than a dozen games in development at its newly formed Amazon Game Studios division, following up on its purchase of Killer Instinct developer Double Helix earlier this year.”

Why Amazon Is Releasing a Set-Top Box: Apple TV's pointer makes it frustrating to use. Roku's search needs wor… http://t.co/8SiiPppZgj

Gizmodo has a tongue-in-cheek run-down of all the device’s specs:

“Fire TV is a little black box with a quad-core processor and its very own dedicated GPU. It has 2GB of RAM, Mimo dual-band Wi-Fi, which enables it to boast three-times the speed of Roku, Apple TV, and Chromecast. It supports 1080p streaming, and includes Dolby digital surround sound out via HDMI out. It is insanely thin. It comes with a thin, sleek, small black remote that works via Bluetooth. You will probably lose this small remote.”

Check out a demo of Amazon Fire TV’s voice search in the video above.

In addition to voice search abilities, it looks like Fire TV can be rigged up for karaoke parties. The Fire TV comes with a microphone, which means you no longer have to deal with cumbersome on-screen typing to search for your favorite movies or TV shows.

One cool feature of this device is ASAP, which is basically a sophisticated algorithm that pre-loads content Fire TV expects you will want to watch next. This reduces buffering time.

Didn't realize I would be replacing my #XboxOne so quickly! @amazon Fire TV get in my living room!

According to TechCrunch, Amazon’s Fire TV is available now. When you buy a Fire TV, you also get a 30-day free trial of Netflix and Amazon Prime. You can buy it on Amazon.com right now, with free shipping. 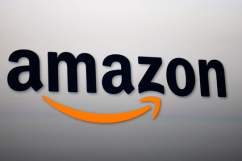