A massive leak has provided Apple fans with a sneak peek at the specs for the iPhone 6. Here is a guide to all the updated info we now have on the iPhone 6’s technical specs, as well as info on the release date for this new phone.

BGR reports that this latest leak comes from KGI Securities analyst Ming-Chi Kuo, who has a track record for making accurate predictions about Apple’s new products. These predictions are usually based on sources in the Apple supply chain.

According to BGR, Kuo believes that the new iPhone 6 will have a 4.7-inch display, with a pixel density of 326 pixels per inch.

“Kuo said that the iPhone 6 will feature a new Apple A8 processor along with 1GB of RAM. While rival Android devices move to 2GB or even 3GB of RAM in 2014, Apple is apparently content to stick with 1GB…

The analyst also says Apple’s new iPhone will feature a big design overhaul that is much thinner, and the bezel on the sides of the display will be reduced by between 10% and 20% so that the phone can still be used comfortably with one hand despite the larger screen.”

Rumors have been swirling for months that the iPhone 6 generation of smartphones would consist of two offerings: a phone, and a larger phablet device. Kuo reports that this rumor is true. The phablet will have a 5.5-inch display.

This is somewhat surprising, as Apple has never released a larger, “phablet”-sized version of their iPhone before.

4. Only High-End iPhone 6 Will Get Full Sapphire Glass Treatment

According to MacRumors, only certain iPhone 6 models will get the full sapphire glass treatment on their display:

“Kuo says only high-end iPhones — like the 64GB 5.5″ iPhone 6 — may include a sapphire screen cover due to supply constraints, though he says the company will want to begin integrating Touch ID sensing into the screen in the future and will need sapphire glass for accuracy.”

5. Apple iPhone 6 Getting an NFC Chip

Predicting an Apple product with an NFC chip is the surest way to lose credibility as an analyst.

According to Business Insider, Kuo has made one surprising prediction: the iPhone 6 will get an NFC chip:

“He says Apple will include a near-field communications (NFC) chip, which we doubt will happen. NFC lets devices talk to each other by tapping them against other NFC devices. It’s commonly used for mobile payments and sharing content between phones.”

This is potentially huge, as the iPhone has never had a NFC chip before. However, some Apple fans are reluctant to believe this prediction. In just a few short months, we should know for sure just what Apple has stashed inside their flagship smartphone. 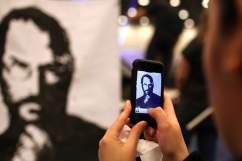