LG released their G2 smartphone (pictured above) last September, but a successor is already on the way. We’ve got the scoop on LG’s upcoming G3 phone. Here’s what you need to know.

TechRadar writes that the LG G3 will be announced sometime between May and July 2014, and be available to buy shortly thereafter. One rumored release date is May 17.

Thinking about buying the LG G3 as a gift? Listen to the tips about buying smartphones in the audio file above.

Pocket Lint reports that the body of the LG G3 will feature improved ergonomics, and retain the rear buttons featured in the LG G2.

“The G3 body should be a polycarbonate build with the buttons on the back as we’ve come to expect from LG devices. The finish should be a smooth matte, adding more grip than the current shiny plastic models manage to offer. “

The display of the LG G3 is rumored to be bezel-free, or nearly bezel-free.

LG’s confirmed its next flagship phone (probably the G3) will sport a quad HD display. http://t.co/JfIthFtuam

The Verge writes that the LG G3 will have “crazy resolution.” Rumored specs for this new smartphone include 2560 x 1440 screen resolution, a 5.5-inch screen, Gorilla Glass display, a 13MP camera, a microSD slot for up to 32GB of storage, 3GB RAM, and Android v4.4.2 (KitKat).

TechRadar reports that the G3 is expected to be “slightly cheaper” than its direct rivals from other manufacturers. Phone Arena adds: “We don’t expect anything less than the usual $200 on contract, or $600+ without carrier subsidies.”

The LG G3 may launch in a golden color variation, according to The Verge.

Digital Trends writes that the LG G3 will also have an improved UI with “advanced personalization” features.

“In mid-March, a rumor circulated LG was working on custom, intelligent software features for the G3. These could take advantage of Google Now’s abilities, and add in learning capabilities to adapt the device to the way you use it. These are supposed to make the phone more personal, and you more productive, although we’re not sure about a series of ‘helpful ideas’ LG wants to provide on the device. This just gives us flashbacks to Microsoft’s Clippy.”

The phone may also be waterproof, and include biometric login features like retina or fingerprint scanning. 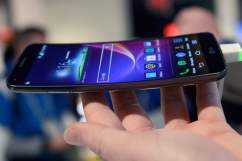