Sony’s console life cycle is continuing to thrive with the introduction of the next-gen PlayStation 4. This doesn’t mean that Sony has completely abandoned its last console, the excellent PlayStation 3. Several gamers have moved on to the next-gen of gaming, but there’s still a large amount of gamers who still cling to their PS3s.

A ton of great headsets, controllers, capture devices etc. have hit the PS3 accessories market. We’ve compiled a list of the ones that are high quality and worth spending a few gamers bucks on. If you truly appreciate your well-worn or brand-new PS3, then you need to cop one or all of these awesome console add-ons.

These are the 10 best accessory add-ons that any dedicated PS3 owner should immediately adopt.

If you’re one of those gamers who’s always on the move with your trusted PS3, then you’re going to have to invest in a trusty backpack. RDS Industries has a pretty sturdy black backpack that features adjustable padded straps for comfort, plus it’s able to package every model of the PS3 released thus far. Your controllers will fit into this great backpack just fine, too.

Sony’s DualShock 3 controllers are incredibly trustworthy PS3 devices that warrant their 1st-party affiliation. But if you’re dead set on spending some gamer cash on a 3rd-party configured controller, you can’t go wrong with Logitech PlayStation 3 Cordless Precision Controller. It’s physical build takes some time to get used to, but it performs just as well as its controller competitors. Take note of these features, though – you’ll need a USB port to operate it and you won’t able to turn off your PS3 with it. This game pad makes for a good backup controller if your DualShock 3 goes on the fritz.

The PS3 is a hub for more than just playing video games. Sony’s 3rd console features Blu-Ray disc compatibility and the option to stream movies and music. This remote is pretty much an essential accessory that every PS3 owner should have if they’re a Netflix fiend. One of the better features of this remote is it’s ability to switch between 2D and 3D viewing modes on your TV.

Racing game fans usually like to replicate the experience of hitting the road for real through the use of a racing wheel. The Logitech Driving Force GT Racing Wheel is the best one for PS3 owners. It’s skill set will appeal to the most hardcore and diehard tuner heads – a 24-position real time adjustment dial, 900-degree wheel rotation, force feedback technology, super responsive gas and brake pedals and a sequential stick shift.

If your media center already comes with a HD TV and a PS3, it only makes sense to make sure your PS3’s graphics look as good as they were developed to be. You can pretty much purchase any Universal HDMI Cable that’s out there for your gaming console of choice. Any 8-foot cable is worth getting so you not only have a long cable that can reach around your other devices, you have a PS3 that’s ready for prime time HD graphics.

Have you ever wandered into a game stream via Twitch.tv? Sooner or later, you might want to start a livestream gaming channel of your own and entertain an audience of gamers such as yourself. The definitive video game capture device you’ll want to get is the Elgato Game Capture HD. Not only does this device already come with Twitch.tv compatibility, it lets you easily connect to your PS3 with a single cable and it features social media sharing capabilities.

Another high quality wireless gaming headset for the PS3 is ASTRO Gaming’s A50 model. Not only does it look great, it also features some of the best sound quality ever tuned to a gamer’s tastes. This headset’s 5.8-GHZ wireless technology makes sure the audio frequency heard over this accessory is undisturbed and clear as can be.

If you want a great Sony-made set of wireless headphones, then it’s best to pick up the PS3’s Gold Wireless Stereo Headset. The earmuffs feel immensely comfortable. the wireless experience usually performs without a fault and the adaptable audio is always in line with your gaming experiences. These 1st-party headphones are simply the best of the best.

You probably have a three buddies who always find time to head to your crib and game for hours on end. In order to appease to your collection of gamer buddies, you’re going to have to make sure your collection of PS3 controllers are always charged and ready to go. Make sure you throw a few dollars at dreamGEAR’s PS3 Quad Dock. You can charge up to four separate PS3 controllers at one time, so this device is a godsend for gamers who’s always in local multiplayer sessions. 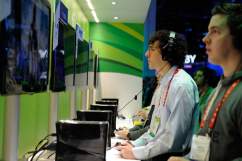