Rob Park (Left) & Ronan Ryan (Right) are both featured in “Flash Boys,” a book by Michael Lewis about high-frequency trading. You can buy it here.

Along with Brad Katsuyama (Center), finance experts Park and Ryan are responsible for increasing public awareness about the shady practice of high-frequency trading. Here’s what you should know about these influential trading experts.

1. Rob Park Is a ‘Gifted Technologist’

Park and Ryan, along with Brad Katsuyama, were recently featured in an excerpt from “Flash Boys” published in the New York Times Magazine.

In the New York Times Magazine piece, Rob Park is called a “gifted technologist.” It was Park who helped to discover the secrets of high-speed trading. NYT Mag writes that Park was asked to figure out why some exchanges were reacting differently when orders were placed on them:

“One morning, while taking a shower, Rob Park came up with [a] theory. He was picturing a bar chart he had seen that showed the time it took orders to travel from Brad Katsuyama’s trading desk in the World Financial Center to the various exchanges.

The increments of time involved were absurdly small: In theory, the fastest travel time, from Katsuyama’s desk in Manhattan to the BATS exchange in Weehawken, N.J., was about two milliseconds, and the slowest, from Katsuyama’s desk to the Nasdaq exchange in Carteret, N.J., was around four milliseconds. In practice, the times could vary much more than that, depending on network traffic, static and glitches in the equipment between any two points.

It takes 100 milliseconds to blink quickly — it was hard to believe that a fraction of a blink of an eye could have any real market consequences. Allen Zhang, whom Katsuyama and Park viewed as their most talented programmer, wrote a program that built delays into the orders Katsuyama sent to exchanges that were faster to get to, so that they arrived at exactly the same time as they did at the exchanges that were slower to get to.

‘It was counterintuitive,’ Park says, ‘because everyone was telling us it was all about faster. We had to go faster, and we were slowing it down.'”

Park made this discovery back in 2009.

"They are ripping off the retirement savings of the entire country through systematic fraud." — p. 99 of Flash Boys. Gripping, scary read.

“Ryan was making hundreds of thousands of dollars a year building systems to make stock-market trades faster,” the NYT Mag piece notes. Katsuyama eventually hired Ryan in 2009, giving him the title of high-frequency-trading strategist. Brad Katsuyama hired Ryan because he was seeking technologically gifted people to help him understand how high-speed trading worked. Rob Park and Ronan Ryan were his first two hires on the team to break down the process of high-frequency trading.

“[Michael] Lewis paints Ryan and his coworkers, first at Royal Bank of Canada and later with their own exchange, as the heroes who uncovered the scheme and who altered how business is done by creating an exchange where everyone has the same opportunity in real time to trade.

Lewis reveals how a 38-mile coil of fiber optic cable that creates a speed bump for every trade is helping make Wall Street fair. According to Ryan, the six-month-old Investors Exchange (IEX) gives every client the same opportunity by creating the speed bump that means every trade arrives at the same time.

The new exchange is now overwhelmed by business. Ryan…moved to the US with his parents in 1990 at the age of 16.”

What does the SEC think about bait and switch stock quotes? Most important FLASHBOYS quote? WOW. LOL #HFT pic.twitter.com/6rd0juEaJ6

An excerpt from the Business Standard‘s review of “Flash Boys” reveals that Rob Park holds Katsuyama in high regard. The excerpt notes:

“Mr. Katsuyama has an inquisitive, scientific mind; the more clearly he saw that the markets were rigged, the better he wanted to understand what was wrong with them. He began experimenting on his own and developed a better understanding of how the hoodwinking worked.

One of his first colleagues, in what would eventually become a gutsy, game-changing new venture, was Rob Park, an algorithm guy. ‘All Brad needs is a translator from computer language to human language,’ Mr. Park told Mr Lewis. ‘Once he has a translator, he completely understands it.’ With the funding of the Royal Bank of Canada, the two conducted a series of experiments that provided invaluable information about how high-frequency traders could predict imminent stock movements and exploit them. They even created a weapon, called Thor, that was meant to level the playing field for the ordinary investor. ‘It would have been very easy to make money off this,’ Mr. Park says of Mr. Katsuyama. “He just chose not to.””

It appears that Katsuyama would not have had the same level on impact on Wall Street had he not partnered with Park.

Rob Park & Ronan Ryan, along with Katsuyama, are the managers of the IEX exchange. Park is the Chief Technology Officer, focusing on algorithmic trading. Ryan is the company’s Chief Strategy Officer, with expertise in networking infrastructure. Katsuyama is the President & CEO.

IEX describes itself as follows:

“Dedicated to institutionalizing fairness in the markets, IEX will provide a more balanced marketplace via simplified market structure design and cutting-edge technology. IEX offers a fair-access platform to any qualified broker dealer. IEX is driven by a team of cross-industry experts with backgrounds spanning market venues, electronic trading, and broker-dealers.”

IEX is expected to become a full, registered exchange. According to the NY Post, the timeline for this transition is unknown. 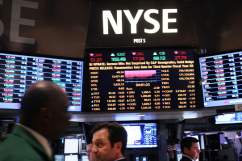