Google is buying Titan Aerospace, which is something of a surprise to people who thought Facebook had the deal all locked up. Here’s what you need to know about Titan Aerospace.

The episode of the GigaOM show embedded above discusses Google’s Project Loon.

Titan Aerospace is in the business of making high-altitude, solar-powered drones. TechCrunch reports that Google will be using the drones to further Project Loon, Google’s initiative to bring Internet access to remote parts of the globe.

I'm not looking forward to a drone-infested future. You think Google Glass is a privacy problem? I'll take facecams over robots every time.

As we previously reported, Facebook (and not Google) was rumored to be interested in buying Titan as recently as last month.

Market Watch notes that Facebook has instead opted to buy Ascenta, another maker of solar-powered drones based in the United Kingdom.

Google buying satellite, robotics & drone companies? The PoliSci major in me thinks no org should centralize this much power.

ZDNet reports that Google’s purchase of Titan Aerospace has the potential to raise a few eyebrows:

“The deal is actually noteworthy on a number of levels, from the technology involved, the social and privacy implications, and the business dealings involving the aforementioned parties and then some.

For starters, the New Mexico-based drone maker specializes in producing high-altitude solar atmospheric satellites. The WSJ report suggests that Google will put these unmanned machines to work primarily for Google Maps, Earth, and other projects that require the collection of aerial images.

Google itself has yet to publicly confirm the deal, but it looks like the New Mexico team will be staying put under current leadership.”

According to the Titan Aerospace site, the company’s drones have a number of uses, including disaster response, search and rescue missions, GPS and radio relays, asset tracking, crop monitoring, and oil spill mapping. 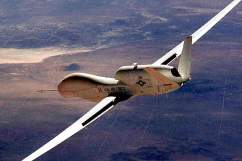