Microsoft is getting ready to launch Windows Phone 8.1 with Cortana, a Siri competitor. Watch Cortana in action in the video above.

In the Verge video above, you can see the Cortana interface for event reminders, weather updates, and fun conversations with Cortana herself. When asked what she thinks of Siri, Cortana says, “Hard to say. So far, our conversations have been pretty one-sided.”

According to a report on The Verge, the Windows Phone 8.1 update with Cortana will roll out in the next few months, with new Windows phones coming pre-loaded with 8.1 as early as this month.

“Cortana is very much Microsoft’s answer to Apple’s Siri, Samsung’s S Voice, and all the other voice assists software suites out there. It lets you manage basic phone functions, set appointments, perform searches, play back music, and set so-called quiet hours when only your inner circle of contacts may reach you. Similar to Google Now, Cortana learns from the web searches you perform and the locations you frequent to try and provide contextually sensitive and timely information.” 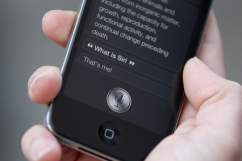