Between heists and exchange collapses, Bitcoin has gone through a rough couple of months. However, devotees of the virtual currency are still planning to gather for the Inside Bitcoins conference in NYC from April 7-8. In the video above, you can learn more about Bitcoin and see attendees from last year’s Inside Bitcoins Conference.

In their coverage of last year’s Inside Bitcoins conference, the Wall Street Journal noted that the conference had just 350 attendees. WSJ added that the volatility of Bitcoin was hampering progress at some companies:

“One exhibitor at the show, AlphaPoint, was there to show off its product, a trading exchange, but they haven’t launched it yet. Mark McGlade, one of the firm’s founders, said they’re waiting for the dust to settle and to see how the regulatory issues shake out before launching the product.”

Inside Bitcoins will host multiple conferences around the globe in 2014. After the event in NYC, the next Insider Bitcoins conference will be held in Hong Kong this June. Additional conferences in Melbourne, London, and Las Vegas are also planned for 2014. You can learn more about Inside Bitcoins on their website. 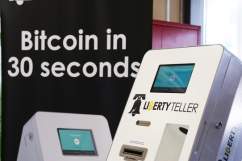 Where Can I Find a Bitcoin ATM Near Me?