NASA‘s Morpheus Lander just completed its 7th free flight at Kennedy Space Center. This autonomous lander can be seen in the video above.

The lander, fueled by methane and oxygen, is considered a “greener” type of spacecraft. Morpheus does not carry a crew, but is capable of selecting safe landing zones autonomously.

Did team pics with @MorpheusLander after landing & snapped a lil close up. That's some high tech business up there! pic.twitter.com/eysIpRmB2p

In a 2009 article, NASA noted that crafts powered by this type of fuel “are not only cheaper and safer here on Earth, but could also be potentially manufactured on the moon or even Mars.”

The Morpheus project has something of a checkered past. In 2012, during the first test flight, Morpheus crashed and caught on fire.

Work on Morpheus began in 2010. For now, Morpheus has yet to be cleared for an outer space mission. 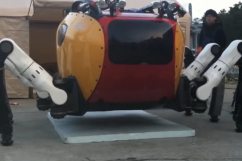