The new Nokia Lumia 930 just debuted at Microsoft Build. Watch the video above and learn everything you need to know about this new Windows Phone.

On the lower end of things, they’ve got the Lumia 630 and 635.
The two handsets are remarkably similar, with just a few subtle differences between the pair. Both have a 4.5″ screen, a 5MP rear camera (though, oddly, there doesn’t seem to be a front camera or a flash), and an acceptably snappy 1.2 Ghz CPU…

On the (markedly) higher end, they’ve got the Nokia Lumia 930. As Nokia’s new flagship Windows Phone handset, they’ve cranked the specs up about as high as they go — but don’t expect it to come cheap. At $599, it’s over 3x as expensive as their just-announced lower-end wares.”

However, the Lumia 635 will be available in the US starting this July. It will be priced at $189, but taxes might bump up that price slightly. 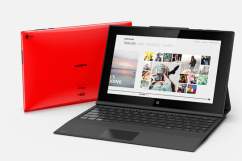 Nokia Lumia 2520 Tablet: The Top 5 Reviews You Need to Read