Aviation hasn’t been this exciting since the days of Lindbergh and Earhart.

A team called Solar Impulse is getting ready to circumnavigate the globe using an aircraft that is completely solar-powered. You can learn more about Solar Impulse’s mission in the video above.

Solar Impulse is a Swiss long-range solar-powered aircraft project. In 2015, Solar Impulse 2 will attempt the First Round-The-World Solar Flight. The plane is expected to fly day and night, without fuel, for up to 7 days straight.

In 2013, Solar Impulse flew a plane across America over the course of two months. The final leg of the trip was marred by uncertainty after a tear was found on the left wing of the aircraft. However, all involved in the flight landed safely on the ground.

“The Solar Impulse 2 weighs just 5,000 pounds and has a 236-foot wingspan covered entirely in solar cells, more than 17,000 of which are on the plane in total. Its creators say that the single-seat aircraft is also more efficient and generally better built than its predecessor — a necessity for making the approximately five-day-long flights across the Pacific and Atlantic oceans without running into problems.” 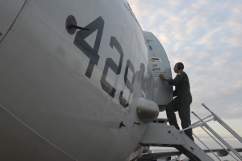