Alibaba, one of the fastest growing and most highly profitable Internet companies in the world, is preparing to go public in an offering that analysts expect to be one of the biggest ever for a tech giant.

Here’s what you need to know about the company.

You can view the Alibaba IPO paperwork above.

The company laid the groundwork Tuesday for an initial public offering expected to be made later this year. The New York Times called it an “embrace of the global capital markets that represents a coming-of-age for China’s booming Internet industry.”

Sameet Sinha, an analyst at a Los Angeles-based investment bank, described Alibaba to the Times as follows:

Chinese e-commerce giant Alibaba files for $1B U.S. IPO, one of the largest technology IPOs in history http://t.co/zH6XweOqE7

In the filing, Alibaba said it intended to raise $1 billion in an initial public offering — a figure used to calculate its registration fee. But the company is expected ultimately to raise $15 billion to $20 billion, which would make it the biggest American I.P.O. since Facebook’s $16 billion offering in May 2012.

However, there are some reasons for investors to be skeptical of these pie-in-the-sky IPO dreams. It is worth noting that another big Chinese company, Weibo, had a rather disappointing IPO.

Additionally, the New York Times notes that Alibaba’s dense and confusing network of interconnected businesses may be a turn-off for some investors.

3. Yahoo! Will Profit Most From the IPO

Chinese e-commerce giant Alibaba is relatively unknown in the US, but that's about to change: http://t.co/9HlrJTHEc8 pic.twitter.com/XMHg7J0ggw

The bulk of the proceeds will go to Yahoo Inc – which bought a 40 percent stake in Alibaba in 2005 for $1 billion and which must sell more than a third of its current 22.6 percent stake through the IPO. Alibaba also plans to sell new shares, people familiar with the plans have said, to bulk up a cash war chest depleted by a rash of recent acquisitions.

The New York Times notes that the Alibaba IPO will mark the end of the “honeymoon” period for Yahoo’s CEO Marissa Mayer. If the IPO cash from Alibaba isn’t used wisely by Yahoo, Mayer could find herself out of a job.

4. Alibaba’s 2012 Sales Were More Than eBay and Amazon’s Combined

The document above outlines Alibaba’s ability to compete in China and beyond, and provides lots of interesting background info about the company.

The Economist wrote a glowing piece on Alibaba in 2013 that described the company’s meteoric growth and status as a global leader in e-commerce:

Peter Cohan, writing for Forbes, argues that it is possible that Alibaba’s US IPO could force Amazon and eBay to cut their prices. Cohan cites the example of how Alibaba was able to financially outmaneuver the Chinese version of eBay back in China.

5. Alibaba Was Founded in 1999 in a One-Bedroom Apartment

Reuters reports that Alibaba was founded in 1999 in a one-bedroom apartment.

CNNMoney notes that the firm is the brainchild of Jack Ma, a former English teacher who resided in Hangzhou, China. He built his company from the ground up, relying on personal investments from his friends that totaled a mere $60,000. These days, his company is worth far more than that initial investment. 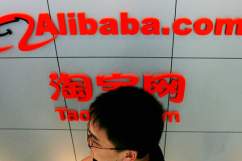 Alibaba Prepping For IPO: 5 Fast Facts You Need to Know