The new LG G3 smartphone is here. Read on to learn everything you need to know about the LG G3’s release date, price, specs, and features.

Check out the official LG G3 teaser trailer in the video above.

After introducing the LG G3 at a London-based live streaming event on May 27, LG announced that their new flagship smartphone would be available in stores starting May 28. The phone will be available worldwide from 170 carriers, but it will debut first in South Korea before being available globally.

TechRadar notes that the phone will be available from all major US carriers this summer.

In the video above, LG touts the new LG G3’s superior “gripability.” The video also compares the screen of the LG G3’s screen to other common smartphone sizes.

The rumored price of the LG G3 has been reported on various websites. GSM Arena notes that the phone will cost $635, at least in South Korea. The phone will launch in South Korea on May 28, and become available elsewhere shortly thereafter.

Phone Arena‘s pricing findings mesh with this report. They predict:

“We don’t expect anything less than the usual $200 on contract, or $600+ without carrier subsidies.”

Boasting a 5.5 inch Quad HD display, a 3000mah battery, and a one-watt speaker with a booster, the LG G3 is designed to appeal to people who use their phones as an audio and visual hub…and to people who don’t want to sacrifice battery quality. The display has a sharpness that is four times clearer than standard HD displays.

Woah being able to resize the keyboard is brilliant idea! Smart keyword is right! I can get rid of my 3rd party keyboard app now. #LGG3

The LG G3 is designed to be as simple to use as possible. To that end, all of the phone’s features were designed with simplicity in mind. For example, the G3 features an innovative 13 MP camera with laser autofocus.

Additionally, the phone will support Qi wireless charging. More importantly, however, this phone offers a “Smart Keyboard” feature. This keyboard reduces input errors by up to 75 percent, according to LG. It works by tracking and analyzing your unique typing habits.

Another smart feature is “Smart Notice,” LG’s new system for providing suggestions and recommendations based on your behavior, phone usage patterns, and geographic location.

Interesting #LGG3 trivia: it owns the rights to Knock On and Knock Off, for its tap to unlock feature. Obviously, it doesn't use Knock Off.

Given the positive reviews that the LG G2 got when it was released last fall, it’s not surprising that early impressions of the LG G3 are also positive.

PC Advisor went hands-on with the LG G3, and called it the “smartphone that could be the best smartphone of 2014.” Moreover, in a comparison between the LG G2 and LG G3, PC Advisor notes:

“We loved – strike that – still love the LG G2, so we’re pleased to find the LG G3 is a solid upgrade to the G2. It has a faster processor, an improved camera and the ability to expand the phone’s internal storage with a microSDXC card, plus it beats all its rivals with a quad-HD screen and – if pricing is as we expect – amazing value for money.” 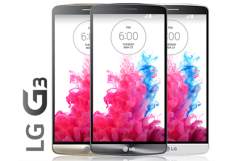