The video above from Snapchat outlines the new features.

Prior to Version 7.0, Snapchat only let you send “snaps,” photo messages with limited captioning abilities. Now, however, you can use Snapchat to send text chat messages as well.

Like regular Snapchat messages, these text-based messages are self-deleting. They aren’t totally self-destructive, however. When you leave the chat screen, messages viewed by both you and your friend will be automatically deleted. You can save a screenshot of the text if you want to record someone’s contact info or shopping lists, for example.

Me with this new snapchat update pic.twitter.com/0AXI3cc3XC

Some people have taken to social networking sites to complain about the new interface and new features in Snapchat. However, it is pretty straightforward.

In order to start a chat, you simply swipe right on a friend’s name in your Snapchat inbox. Snapchat will let you know when a friend is available for chat with a new button that turns blue. When both parties are present, you simply press and hold to share a video chat.

This chat is live and done in real time. You must keep your finger on the screen to keep the video call connected.

These new features will only work if both parties have updated the app. If one of your contacts has yet to install the update, then you will not be able to enjoy new chat features with them.

There are also some control limitations. In addition to having to keep your finger down to keep the chat connection active, you also need to use certain swipe controls to switch between your cameras.

“If you want to switch from your front-facing camera to the back camera, all you need to do is drag your thumb to the upper half of the screen. The camera will automatically switch. These interface refinements are why Snapchat has been a very effective messaging app.”

The disclaimer on the Snapchat App Store page reminds users: “ Even though Snaps, Chats, and Stories are deleted from our servers after they expire, we cannot prevent recipient(s) from capturing and saving the message by taking a screenshot or using an image capture device.” As always, Snap with caution.

In their in-depth report on the new Snapchat features, The Verge notes that there are a number of smaller changes to the app. The developers have designed Snapchat to only notify you once, even if a friend sends you multiple messages in a row. This is designed to cut down on annoying notification sounds, and minimize disruptions. There are also no in-app indicators that the other party is typing. You will, however, get a push notification to your lock screen.

The same Verge article notes that Snapchat users share more photos per day than Facebook users, up to 700 million snaps per day. 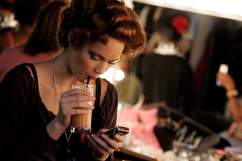