If you like your Android games heavy on the action, our list of this month’s best action games for Android has some awesome recommendations. If you don’t already play these games, you should check them out ASAP.

Check out some gameplay footage from Zombie Gunship in the video above.

In Zombie Gunship, you must shoot down hordes of zombies from the cockpit of an AC-130 ground attack aircraft. The game has a very realistic look that mimics the sort of footage an actual military sniper would see during a sortie. This game earned an 9/10 Editor’s Choice rating from IGN.

Check out some gameplay from Marvel Avengers Alliance in the video above.

Marvel Avengers Alliance is an action-heavy fighting game set in the Marvel universe. If you grew up reading Marvel comics or love watching Marvel Studios flicks, the graphics and characters in this game are sure to appeal. The game now has launched Player VS Player (PVP mode), Season 2.

If you’re of a certain age, you may have played the 80’s Wonder Momo arcade game. The modern update Wonder Momo: Typhoon Booster draws on both the legacy of the 80’s brawler arcade game, as well as the recent Wonder Momo anime series. If you love fighting and Japanese-style games, this is a fun game to try out. And honestly, what other Android game lets you fight flying watermelons and kick a T-Rex in the face?

Check out Dokuro’s gameplay in the video above.

Dokuro has a great atmosphere, evoking a Tim Burton-esque quality. In this spooky little platformer, you must help a skeleton to rescue a kidnapped princess. This game is packed with platforming action, puzzles, and a whimsical story.

5. Rage of the Immortals

The video about outlines the fusion system in Rage of the Immortals.

Rage of the Immortals is an expansive fighting tournament game. There are 20 different arenas to battle in, 190 exclusive fighters, and a great PvP mode. 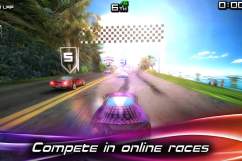 Read More
Action Games, Android, Android Action Games, Fighting Games, Marvel, Smartphones, Technology, Zombies
If you like your Android games heavy on the action, our list of this month's best action games for Android has some awesome recommendations.