Looking up spruce up your Android device with some fresh apps? These are the top five apps you should install this May.

Get a sense of the creepy atmosphere in Zombies, Run! by watching the video above from App Advice Daily.

Zombies, Run! is part audiobook and part fitness app. As you run, the app tracks your running stats, while also immersing you in a fantastic story about the zombie apocalypse. The coolest function of the app are “Zombie Chases,” which force you to put on a burst of speed or risk getting “eaten” during a mission.

The Android version of the app was updated on May 2. Season 3 is airing now, with new episodes launching every week through the summer. This app has a ton of content, including various side missions and race missions.

Media Browser is a great app for streaming videos and more. Android Central notes that Media Browser has gone on sale, in celebration of the update to their sever. That makes it a perfect time to try this app.

Check out the official video from the MosaLingua developers above, and learn more about this cool app.

Learn Spanish with MosaLingua was updated last month, and holds an impressive 4.8/5 star ranking on Google Play. Designed to be used for just five minutes a day, MosaLingua provides a shortcut to getting proficient. Once you’ve mastered the basics, you can then focus on specific words that are relevant to your needs.

Check out Techniqued.com’s review of Fenix for Twitter in the video above.

If you’re not a fan of the official Twitter app, Fenix for Twitter may be a good alternative. With a nice interface, support for multiple accounts, and tons of features, Fenix may just become your new Twitter client of choice.

Check out TechnoBuffalo’s overview of TurboScan in the video above.

Updated on May 1, 2014, TurboScan will appeal to business professionals who need to scan documents on the go. This app helps you to ensure that scanned documents look clean, polished, and pristine. You can also print docs via Cloud Print.

For the best mobile Android experience, we recommend: 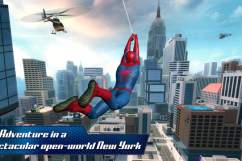