Contrary to some fan’s expectations, the Season 4 finale of “Game of Thrones” was only unavailable on HBO Go for a small pool of users. Still, this is bad news for fans who were eagerly awaiting the answers to some of the season’s most pressing questions. Thankfully, the HBO Go service does seem to be working for the majority of users.

So like, hbo go isn't working and I missed GoT and if it doesn't start working I'm gonna punch a baby in the face

If you can’t access the “Game of Thrones” finale on HBO Go, you can get status updates or customer support from either the HBO Go or HBO Twitter pages. Learn more about why HBO Go is down for a small number of users, and learn about other instances when “Game of Thrones” made HBO Go have an epic fail…

1. HBO GO Failed to Load ‘Game of Thrones’ Season 4 Finale For Some

Multiple users have taken to social media to complain that HBO Go is down. However, the outage does not seem to be as widespread as it has been during some past outages.

“The service didn’t crash, so that was a small victory, but the episode didn’t load onto the servers right away which incensed viewers who were growing impatient with having to wait for the episode to get posted.

From there though, things went rather smoothly which means HBO at least halfway figured the problem out. Not everyone was able to watch the episode on time and some were angered by spoilers from the live airing of the show being posted on Twitter before they could catch up on HBO Go.”

@HBO WHYYYY isn't HBO go working? You guys have to stop playing with my heart like this it ain't that cute

This isn’t the first time that HBO Go has buckled under the collective pressure of the “Game of Thrones” fandom. After the Season 4 premiere, HBO Go went down for a couple of hours.

“HBO blamed the problems on ‘excessive volume.’ The premium cable service also promised to provide the episode on HBO On Demand soon for those with certain cable providers.”

It’s not clear whether HBO will take similar actions during this outage, since the issues are so much less severe than during the last incident.

3. ‘Game of Thrones’ Is Not the Only Popular Show to Crash HBO Go

“Game of Thrones” is certainly popular, but even the comparatively low-rated series “True Detective” also caused an HBO Go outage. HBO Go crashed after the “True Detective” Season 1 finale. In our in-depth coverage of the reasons behind the crash, we wrote:

“Many people trying to access HBO Go tonight are wondering just what exactly has gone wrong on HBO’s end of things. From a technical standpoint, there are many reasons for a streaming video server to become unresponsive. HBO hasn’t revealed many details related to this outage, yet.

However, we do know the causes of some notable streaming video crashes in recent history. In the past, Netflix outages have been caused by accidental data deletion.”

4. There Are Many HBO Go Conspiracy Theories

I really wish I could watch the #GameOfThrones finale. HBO Go freezes every 10 seconds. I'm only 20 min in. #GoT

Many fans and media insiders have wondered whether the recent spate of HBO Go outages has been intentional. These conspiracy theorists believe that by making it harder to watch HBO Go, non-HBO subscribers who use someone else’s password to access HBO Go content may give up and sign up for a subscription of their own.

HBO Go keeps getting stuck at 17 minutes. Dammit. #GoT

The Guardian ran an article that called the recent HBO Go outages “the best thing to happen to HBO.” The article stated:

“These outages might even create new subscribers. There is no way your cable will go out at 9pm on Sunday, no matter how many people are tuning in. If HBO Go becomes unreliable during these big events (it’s practically guaranteed to go out during the GoT finale, if not every Sunday until then), won’t some viewers finally bite the bullet and sign up with their cable provider?”

5. ‘Game of Thrones’ Is HBO’s Most-Watched Original Series, Ever

In fact, “Game of Thrones” is so popular that there are plans to potentially bring the episodes to local movie theaters.

If you’re still having HBO Go issues, you can try logging out and refreshing your cache. You can also email contacthbogo@hbo.com to get help. Here are some other HBO GO tips and advice from HBO Go’s Twitter account:

Tonight's @GameOfThrones season finale could take up to an hour to become available across all devices. Thanks for your patience.

@jhoffman Please be patient while the episode becomes available across all devices. If you're not seeing it right away, check again soon. 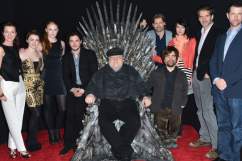