Google has launched a GoDaddy competitor called Google Domains. Want to use it as a web domain registration tool? Here’s what you need to know first.

According to the Google Domains website, domain registration costs just $12/year. The perks included with that purchase are as follows:

“A full set of simple-to-use, robust domain management tools are at your disposal:

2. Google Domains Participation Will Be Limited at First

This Google Domains invitation request form allows you to answer Yes *and* No to the only question. pic.twitter.com/9GvVElC6rD

Many Google fans may be intrigued with the idea of registering a domain through Google. However, participation in Google Domains will be limited for a time. Like most Google pilot programs, this initiative is invite-only. On Google Plus, the Google team writes:

“We’re beginning to invite a small number of people to kick the tires on Google Domains, a domain registration service we’re in the process of building. Businesses will be able to search, find, purchase and transfer the best domain for their business – whether it’s .com, .biz, .org, or any of the wide range of new domains that are being released to the Web.

Google Domains isn’t fully-featured yet, but we’re giving a small group of people the ability to buy and transfer domains through it and send feedback on their experience. (You currently need an invitation code to do so, sorry!) “

According to Business Insider, Google Domains offers an array of nice perks and intriguing partnerships:

“Among other features, the Internet giant is promising subdomains (like maps.google.com), new domain extensions as they become available, and up to 100 email addresses per domain, the new service’s site says.

Google is also offering website building services through partnerships with Wix, Weebly, Squarespace, and Shopify to help users build their websites without needing to learn to code.”

In the same report, Business Insider adds that Google’s research found as many as 55% of small businesses don’t have websites. Google looks to be tapping that market, and making itself as appealing as possible to first-time web domain shoppers.

4. Some Critics Say Google Already Has Too Much Info About Our Lives

Google IO developer conference has a presentation on top level domains. Glad to see this kind of exposure emerging. http://t.co/ssFMcfWGok

The launch of Google Domains comes at an interesting time. We are just days away from Google I/O, as well as just days after some prominent tech writers have criticized how much data Google gathers about its users. Business Insider‘s Megan Rose Dickey recently wrote an article entitled “It’s Time To Admit The Amount Of Information Google Gathers About Us Is Terrifying.” The article notes:

“rom the consumer side, you could stop using all of Google’s products, but living without Google is genuinely hard — there just aren’t many better alternatives for search, web browsers, and email.

So it’s not just that Google knows a lot about us, it’s that we’re at a point where our ability to not let Google know about us has serious consequences. It would be very difficult — for some people impossible — to live life without Google.”

Writing about the launch of the Google Domains beta, Gizmodo writes:

“We’d imagine that selling domains and helping build websites is a great way for Google to compel people to sign up for Google advertising services and enterprise tools like Drive. This makes good business sense for Google. However, some small business might not want to give Google so much control over their online presence. God knows, Google’s burned us all in the past.”

That bit about being burned is particularly relevant for any Google user that has been saddened by the sudden loss of past Google products, such as Google Reader, GOOG 411, or Google Health. Only time will tell whether Google Domains is the next Gmail, or merely another product that Google will launch and then quietly bury a few years later. 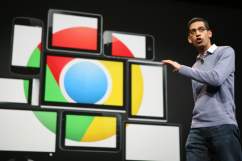