Much to the surprise of many tech insiders, Google surprised us all with a preview of their newest version of Android. Google I/O featured an L Developer Preview, a sneak peek at the future of Android.

Even though Android L won’t be getting a public release until later this year, you can still get a sneak preview of the features in L. If you love the Android OS ecosystem, read on to learn all about this new flavor of Android, which will be faster and more feature-rich than ever before.

In the I/O keynote, the Android team noted that Android L will have a beautiful new look and feel. In their coverage of the livestream keynote, The Verge explained the look of the Android L Developer Preview as follows: “It’s not as dark and foreboding as Holo, but not as transluscent as iOS.”

The UI will be zippy, and with the addition of a new runtime, this version of Android will be the least laggy yet. That increase in speed and power is especially good news for gamers who love playing on Android devices. The video game graphics featured during the Keynote were smooth and impressive. Another bit of good news for gamers: Android L will have better battery life, too.

There are lots of new features here, and even though many of them are quite minor, they really enhance the user experience. New notifications are more interactive than ever before, while “nested scrolling” allows you to customize how the UI scrolls. Finally, “personal unlocking” lets you set up “safe” locations, Bluetooth devices, or voiceprints. When the OS knows that these conditions are trusted and safe, you will be able to access your device without the hassle of entering a PIN.

Other new features will include a different keyboard interface, an option for “do not disturb”, and new quick settings. Remote Wipe will also be supported, allowing you to reset your Android device to factory settings in the event of theft or loss.

“Material Design” is going to be Google/Android’s design ethos for the foreseeable future. Inspired by pen and paper functionality, Material Design is a new design language for Android, Chrome OS, and the web. It includes fresh colors, refreshed iconography, and new typography.

Android L includes a feature called “recents,” which is a stacked card interface, similar to Google Now notifications. Recents lets you track recently viewed apps and web pages, without having to open an app and flip through them manually in a browser like Chrome.

In Android L, you can use a Google Search to explore certain apps. A new API in Google Play Services will enable users to rediscover content they found before, but had perhaps forgotten about. In the demo of Android L, the Android Team noted that you can get app suggestions for auto complete.

Want to get your hands on Android L ASAP? Visit http://developer.android.com starting June 26 for developer-level access. 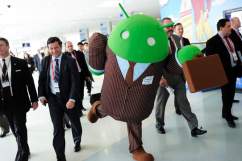