Just two months after releasing the Galaxy S5, and mere weeks after the release of the Galaxy S5 Active, Samsung is gearing up to release the Galaxy S5 Prime. Learn everything about this hot new phone right here, or get some recommendations about what accessories to use with the new phone in this post.

Check out the video above from CNET, which details leaked info about the Samsung Galaxy S5 Prime.

Samsung will be hosting an event on June 12 in New York City. The main focus on the event will be the launch of the new Samsung Galaxy Tab S, but some tech blogs have speculated that Samsung could surprise viewers with the S5 Prime smartphone at the same event. Phone Arena‘s data sheet on the upcoming phone suggests it will debut in June. However, some techies believe that the S5 Prime won’t debut until Berlin IFA in September.

The S5 Prime will differ from the regular S5 in a couple of key ways, mostly to do with specs and features. The S5 Prime is expected to lack the rugged construction of the S5 Active, but will likely still have the IP67 dust and waterproof rating of its sister S5 phones.

“The Galaxy S5 Prime is set to be Samsung’s “super premium” flagship phone that will not only feature a metal body but that is also rumored to feature a 5.1-inch 2560 x 1440 (Quad HD or 2K) display, Qualcomm Snapdragon 805 processor, 3GB of RAM, a 16-megapixel camera, 2-megapixel front-facing camera, LTE-Advanced support, microSD support and Android 4.4.3 KitKat.”

BGR has also noted that one thing that may entice S5 fans to consider the S5 Prime is improved download speeds, which will come thanks to a Qualcomm’s MDM 9635 chip. This will possibly allow for download speeds of 225Mbps.

3. Quantities of Samsung Galaxy S5 Prime May Be Limited

Check out a concept of this phone in the video above.

Stuff relays a report that supplies of this phone may be limited:

“An anonymous source quoted in the Korea Herald suggests that the QHD screen may limit supplies of the Galaxy S5 Prime, noting that ‘Samsung Electronics was supposed to use a QHD display for its Galaxy S5, but it failed due to the high cost. As the Galaxy S5 Prime will be rolled out in small quantities, it is highly likely that QHD will be adopted.'”

The podcast above outlines the “Prime” variants of the Samsung Galaxy S5 and the HTC One M8.

TechRadar notes that the Samsung Galaxy S5 Prime is going to cost more than the regular version of the phone. The S5 Prime is likely to cost around $880 off-contract.

However, they note, the price of the S5 Prime is likely to actually be a bit lower after release-date promo pricing is taken into account. The price of the phone may be as low as $700.

Listen to the audio clip above to get tips about apps you should have on your new smartphone.

Based on the lineup of S4 variants, it’s not inconceivable that Samsung’s next move after debuting a S5 Prime and S5 Mini will be an S5 Zoom. Only time will tell, of course, but Samsung is likely to keep pushing new variants of the S5. Just a couple of months after its debut, the original Galaxy S5 is retailing for a mere $99 with contract. As Samsung pushes out new models, it will likely make the Galaxy S5 even more affordable than it is now. 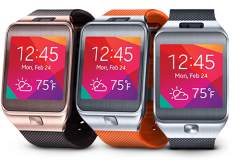