Wondering if you should buy a Samsung Galaxy Tab S? We round up the five major facts you need to know about this new tablet.

The Samsung Galaxy Tab S comes in 8.4-inch and 10.5-inch versions. As a basis for comparison, the iPad Air is 9.4 inches, and the Microsoft Surface RT comes in at 10.6 inches.

Both of the Tab S models are 6.6mm thick, which is about the thickness of five credit cards stacked together.

Yep. It's a tablet. Meet the Samsung Galaxy Tab S with the first OLED display on a full-sized tablet pic.twitter.com/f4DdKJQ2FF

Boasting a rich super AMOLED display, the Galaxy Tab S is the thinnest and lightest tablet Samsung has ever made. The AMOLED display offers deeper blacks and more intense colors, making this tablet appealing to people who like watching movies on their tablet.

The super AMOLED screen also uses less battery than you might think, which is great for people who aren’t near a charger regularly during the course of the day. Users can expect 11+ hours with video playback at 1080p.

Papergarden is a magazine app optimized to fit the 16:10 apect ratio of the Tab S devices, which is nice because of the new partnership between Samsung and Conde Nast publishing, as well as a partnership with National Geographic. Additionally, a new UI element called Content Home allows users to aggregate a variety of different content.

The tablet’s Remote PC features will allow you to access and transmit your data from your computer, no matter where you are in the world. Additionally, you can seamlessly move files or photos from your tab to your Samsung Galaxy phone. There is also a “Kids Mode,” which is family-friendly and lets kids use a tablet safely.

Tab S users will also get access to the ad-free Milk Music streaming platform. You can learn more about Milk Music here.

The Tab S’s adaptive display can tell how bright a room is. From there, it automatically adjusts the display settings of seven core apps to sharpen the picture and reduce eye strain.

You can mirror a Galaxy S5 phone through the @Samsung Galaxy Tab S + answer a call. http://t.co/IfFUP9Oupp pic.twitter.com/FctkrlJGfn

Another cool feature is the fingerprint scanner: a first for Samsung’s tablet line. Fingerprint recognition on this tablet lets up to eight people set up their own profiles and private browsing modes. This is great for people who plan to share their tablet.

Want to get your hands on the Samsung Galaxy Tab S? It will be released in the summer of 2014. The precise date will depend on where in the world you live, as well as what model you want to buy. You’ll also be able to see select Samsung Galaxy products featured in Marvel’s upcoming film Avengers: Age of Ultron.

Launch dates for both sizes will be in July, at least for the US. The LTE version of the Tab S is expected shortly after the initial July launch. 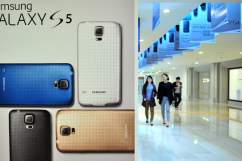