If you don’t want to spend your summer sweating it out in a real arcade, these Android games bring the arcade to you. Here are our top picks for June’s best arcade games on Android.

Kosmik Revenge is like a souped up version of Space Invaders or Galaga. In this futuristic space shooter, you take on wave after wave of alien enemies. Whether you’re old enough to remember playing Space Invaders in a real arcade, or just encountering this type of game for the first time, Kosmik Revenge is full of pulse-pounding action.

Check out the official trailer for World of Thingies in the video above.

World of Thingies is a fun puzzle-style arcade game that boasts addictive gameplay and a cast of cool characters. Described by some users as a combination of Candy Crush and Pokemon, this game will appeal to matching game fans who are sick of match-three games that are overly pushy with IAP. There’s IAP here, but it’s not as pushy as it is in games like Candy Crush.

Samurai II: VengeanceThe long-awaited sequel to Samurai: Way of the Warrior has finally arrived on iPhone and iPad! While the original got rave reviews for its stylized manga graphics and quick, bloody gameplay, Samurai II delivers even more action and an intuitive new control scheme. Samurai: Way of the Warrior was featured in Best Games of 2009 by Apple — Samurai II is a true successor, aided by over a year of focused development. Overall production values and vicious action put Samurai II on par with console 3D brawlers. Screenshots don't do Samurai II justice — the fluid action has to be seen running at 60 frames per second on the Retina display or popping off the iPad screen. But looks alone won't carry a game — the developers listened to fan feedback and improved gameplay throughout. With a new virtual d-pad, dynamic camera, environmental puzzles, traps, and vicious new enemies, Samurai II is brand new experience for hack 'n' slash gamers on the go. Samurai II sends Daisuke on a quest for revenge across the war-scorched countryside. From a seafaring village to a flying fortress to the legendary Isle of the Dead, the samurai will stop at nothing to hunt down his arch-enemy Orochi. Will he get his Vengeance?2010-10-15T17:11:30.000Z

Check out the trailer for Samurai II: Vengeance in the video above.

While Samurai II: Vengeance isn’t a new game, the Android version did get an update quite recently. Updated on June 4, the latest version of this game is Version 1.1, which offers improved performance on older/low-end devices, as well as improved gamepad support and graphics optimization. With 60 FPS in the action sequences, this game feels fast and impressive. Enjoy your samurai revenge mission and relish in the gory action of battle.

Edge of Tomorrow Game Android Review – AndroidizenEdge of Tomorrow Game on Android – In this review we take a look at new movie-tie in Edge of Tomorrow. Overall, this is a good game with solid game mechanics the fusion of an endless runner of sorts with a FPS with auto fire and a world environment changing around you is compelling and well executed. Subscribe: http://bit.ly/1z21oni Visit our site: http://British.Reviews Save money on your games: http://bit.ly/1jxpKkt Please Like and Share this video! Unlike so many movie tie-ins this one actually feels like some love was spent on it to craft a fun experience and what's better no IAP's and Free2Play **** The Androidizen Subscribe! http://youtube.com/TheAndroidizen Follow on Twitch! http://twitch.tv/TheAndroidizen Check out our website http://androidizen.com Visit YouTubers.Watch http://YouTubers.Watch Like us on Facebook! http://facebook.com/Androidizen Follow us on Twitter! http://twitter.com/TheAndroidizen ***** Subscribe for updates on Facebook: https://m.me/androidizen?ref=join2014-05-13T09:31:23.000Z

Check out of a review of this game in the video above.

If you loved the Tom Cruise flick Edge of Tomorrow, which opened in theaters on June 6, the Android game based on the film is sure to please. The Edge of Tomorrow game will appeal to arcade game fans who love first person shooters. Who doesn’t love killing aliens? Even if you didn’t catch the film, you’ll likely still enjoy this sci-fi title.

SLIDO – catch all the blocks – gameplay trailer HDhttps://play.google.com/store/apps/details?id=com.verynicestudio.slido Slido is a fun and intuitive game with an addicting gameplay. Slide the color buckets and catch the falling blocks. Your goal is to get as many points as you can while the game is gradually getting harder.2014-06-02T13:51:28.000Z

Check out the gameplay trailer for Slido in the video above. 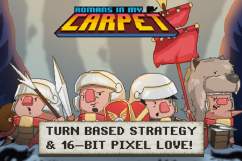 Read More
Android, Android Apps, Android Games, Android Smartphones, Arcade, Mobile Games, Technology
If you don't want to spend your summer sweating it out in a real arcade, these Android games bring the arcade to you.