theScore offers a ton of great features for the World Cup, along with other major sporting events. You can receive free Push Alerts about major goals or key moments, or just stay on top of breaking news about your favorite players. One great feature that will appeal to soccer fans is the Shot Tracker feature, which will let you see exactly how a goal was scored.

Hopeless: Football Cup is the latest in the “Hopeless” series of games (which includes Hopeless: The Dark Cave and Hopeless: Space Shooting.) If you’re looking for a more casual soccer game to play on mobile, this Hopeless game may be worth checking out.

Some unlucky blobs have found themselves in the middle of the field, and must defend themselves against angry football fans. You must tap the screen to hit the incoming balls: miss too many, and it’s game over.

ProGol Guess World Cup Results is an Android app that lets you create your own tournaments and compete against friends. Whoever is best at guessing the final scores of each football match-up is the winner.

The rules are very simple. Predict the winning team, score one point. Get the final score right, and score three points. It’s a great way to add an element of drama to a World Cup match that you aren’t all that invested in.

Onefootball Brasil – World Cup is a cool app that offers live chat and play-by-play match commentary in its Live Ticker. There is also a robust array of video content. In addition to pre-match and post-match coverage, you can see videos from press conferences and player interviews. If you love football news, this World Cup app is a must-have.

New World Cup Football Quiz is a fun word game that will appeal to World Cup fans. In this casual game, you are presented with one of 400 different player photos. Your job is to guess the player’s name. Some names, like Messi or Ronaldo, will be easy. Other names, however, will challenge even the most obsessive World Cup 2014 fan. 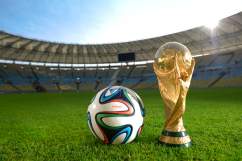