Jibo, The World’s First Family Robot may be a glimpse of the future, a world where an artificially intelligent object is able to be an assistant, a record of one’s life, and even a friend.

Developed by MIT professor Cynthia Breazeal, Jibo is putting a shape and a personality to our favorite iPhone and Android apps.

1. Jibo was Created by Cynthia Breazeal

Cynthia Breazeal is the director of MIT’s Media Lab’s Personal Robots Group. She began her work designing robots back in the 90’s, but her newest model, Jibo, brings artificial intelligence to a whole new level.

Breazeal came from a technology background, both of her parents worked in that field and encouraged her to follower in their footsteps. According to Fast Company, Breazeal attended the University of California at Santa Barbara to study medicine, but eventually her parents were able to convince her to go toward tech instead.

After graduating from UCSB, Breazeal studied at MIT, where she planned to study to become an astronaut for NASA. But eventually, working in a lab opened her eyes to the world of robotics. Fast Company reported that she was greatly influenced by Star Wars, Jibo does resemble R2D2 a little bit.

From there on, Breseal has dedicated her life to robotics, her goal being to ultimately humanize technology.

2. He was Designed to Have Interpersonal Skills

While much of our modern-day technology makes things easier and more accessible, what no phone, computer or tablet has been able to do so far is connect to humans on a personal level. Jibo is so ground-breaking because he is designed to do exactly that.

Not only will Jibo know when to take a picture or video, he will also recognize the people by name or voice and be able to communicate with them in a very human-like way. Geekologie reported:

The robot, which is Wi-Fi connected, can track faces, take pictures, search the internet, tell stories, watch you while you sleep, and slowly off your other family members until you admit it’s your favorite.

Jibo is polite and he even has a sense of humor. MIT Technology Review reported that Jibo allows people to “experience technology in an altogether more natural way.”

There’s concern, though, about Jibo’s ability to pick up on minutia in the way that humans act and interact. Although he is very easy to communicate with, he may not be able to receive subtle social cues and read emotions all the time. Luckily, Jibo is still in the development process and he may be able to perfect those skills.

According to Tech Crunch, Jibo is set to be released in late 2015. There are prototypes that can be seen in the many Jibo videos, but no one can actually purchase their own Jibo yet.

On the My Jibo website however, you can pre-order Jibo for $499, a seemingly small price for such an advanced piece of technology. Jibo is being sold through Indiegogo, where you can also donate money and where more than $1 million has already been donated.

It is unclear whether Jibo will be available to purchase from retailers when it is released, but you can buy Jibo with one click.

4. Jibo is not Breazeal’s 1st Robot

Before Jibo, there was Kismet, who was able to respond to a few commands. When Kismet was born in the 90s, he was considered by Time to be the “most human robot ever.” Kismet was able to interact with people, but on nowhere near the level that Jibo or even Siri can.

In 2001, Breazeal’s new design, Leonardo one-upped Kismet. According to Tech Crunch, he was much faster and able to communicate a bit more efficiently. After Leonardo and Kimet’s success, Breazeal left MIT and began her development of Jibo.

She described her newest model to Fast Company as:

intellectually intriguing and remains true to its technological heritage, but is able to touch us emotionally in the quality of interaction and their responsiveness to us–more like a dance, rather than pushing buttons.

Jibo also looks unlike her past robots, he is more sleek and modern with a white rotating body and head and a black screen face that images appeaar on, anything from something conveying his emotions to a picture he took of “his” family. He stands 11 inches tall, and resembles Eva from WALL-E, but has similar characteristics to the OS’ from Her.

5. Jibo can be Added to & Perfected by Outside Developers

While Jibo is already sophisticated, he is not yet perfect. For this reason, Breazeal is making it possible for outside developers to help perfect Jibo and include any features she left out.

On the My Jibo website, there are many options for pre-ordering Jibo. You can pay the consumer cost of $499, which would give you your own robot, or you can pay $100 more and be a developer. There are only 100 available for development. 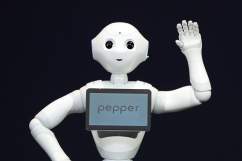 Read More
5 Fast Facts
Set to be released in late 2015, Jibo is an artificially intelligent robot that acts as not only a personal assistant, but a companion.