1. Netflix vs. Hulu Plus: Free Trial and Billing

If you’re new to Netflix, you can try Netflix free for one month. Once your trial ends, your membership price will automatically go up to $8.99 a month. According to USA Today, “Existing Netflix subscribers will maintain the original $7.99 monthly fee for two years.” With a Netflix subscription, you’ll be able to stream unlimited TV shows and movies over the Internet on your TV using any Netflix-enabled device. You can watch Netflix on your PS3, PS4, Wii, Xbox, PC, Mac, smartphone, tablet etc.. New members don’t need to sign any contracts or have to worry about cancellation fees.

While Netflix offers new members a free one month trial, Hulu Plus only offers one week trial. After the trial is over, members will be charged $7.99 a month. Hulu Plus members can also stream current TV shows and popular movies with their membership. Members can watch Hulu Plus content on the following devices: iPad, iPhone, Apple TV, PS3, Roku, Xbox 360, Wii and laptops.

2. Netflix vs. Hulu Plus: Mobile Apps

Netflix seems to be pretty consistent when updating all versions of its apps. Earlier this month, Netflix updated its Android app with the “Post-Play” feature, which works with TV shows and movies (tablets only). This means Netflix will automatically queue up the next episode and start playback. The new update also offers recommendations of what to watch next. Android devices must be running Android 4.0 or higher. Netflix also recently updated both the iPhone and iPad apps to version 6.0 which brings a new design. The update sports a hot new logo and bug fixes.

According to the Google Play Store, the last time the Hulu Plus Android app was updated was on March 18, 2014. The update allowed users to cast and control their favorite TV shows and movies on devices like Xbox One, PS4, and PS3 from their Android device. When it comes to Hulu Plus apps for iPhone and iPad, the last update was on May 14, 2014 only fixing white screen issue along with other bug fixes.

Netflix and Hulu Plus both offer a variety of family-friendly content in their catalogs.
With Netflix, you can stream original content like Orange is the New Black, The Killing, and Arrested Development. With Hulu Plus, you can watch new exclusive additions like Deadbeat, The Bridge, Behind the Mask, Hotwives of Orlando and The Awesomes and more.

4. Netflix vs. Hulu Plus: Streaming Quality

Netflix members have access to high quality HD streams. So all your favorite shows will look amazing on your HD TV. Netflix also offers Super HD but it all depends on who your ISP and broadband performance and quality. Not every title is displayed in HD or Super HD.

Hulu Plus also offers its members HD videos. While not all content on Hulu Plus is HD, users can filter HD-only content while browsing the Hulu catalog.

5. Netflix vs. Hulu Plus: Conclusion

Overall, Netflix does their best to make sure there’s something for everyone to watch with high content quality and accessibility. They have made it so their members can watch content on multiple devices. For the monthly cost of $8.99 its quite a bargain for streaming unlimited TV shows and movies. Which service do you prefer?

You can download Netflix from the Google Play Store here.

You can download Netflix from the App Store here.

You can download Hulu Plus from the Google Play Store here.

You can download Hulu Plus from the App Store here. 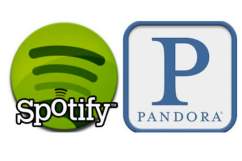 Spotify vs. Pandora: What’s the Best App for Streaming Music?