AOL’s Ryan Block is in the news after he recorded a phone call with a particularly abusive Comcast customer service rep.

Here’s everything you need to know about Block and the Comcast incident.

1. Block Works for AOL & Was Chief Editor of Engadget

Ryan Block is an AOL product manager and former editor-in-chief of Engadget. He also co-founded the community site gdgt, which was acquired by AOL.

According to his website, Block has a varied resume that includes time at a number of prominent companies. These companies include tech investment firm Bowery Capital, video game “save card” company FTW, and the mobile development lab Milk, which was acquired by Google.

While nobody deserves bad customer service, it’s particularly bad thing to give a poor experience to someone with such deep roots in the tech community. After being encouraged by others to post the call recording online, Block uploaded the audio file to SoundCloud on July 14.

The story quickly went viral, partially thanks to Block’s 80,000+ followers on Twitter.

Generally good experiences with Comcast… until we canceled. Rep got straight up belligerent. I was able to record some, should I post it?

2. His Soundcloud of the Comcast Call Has Been Streamed 4 Million Times

When he uploaded the audio file of the call, Block also added some background information:

“Please note: this conversation starts about 10 minutes in — by this point my wife and I are both completely flustered by the oppressiveness of the rep.

So! Last week my wife called to disconnect our service with Comcast after we switched to another provider (Astound). We were transferred to cancellations (aka “customer retention”).

The representative (name redacted) continued aggressively repeating his questions, despite the answers given, to the point where my wife became so visibly upset she handed me the phone. Overhearing the conversation, I knew this would not be very fun…

Within just a few minutes the representative had gotten so condescending and unhelpful I felt compelled to record the speakerphone conversation on my other phone.

This recording picks up roughly 10 minutes into the call, whereby she and I have already played along and given a myriad of reasons and explanations as to why we are canceling (which is why I simply stopped answering the rep’s repeated question — it was clear the only sufficient answer was “Okay, please don’t disconnect our service after all.”).”

.@comcast I hope the quick action you take is a thorough evaluation of your culture and policies, and not the termination of the rep.

According to one Reddit user who claims to work for Comcast, there’s a good explanation for Ryan Block’s “nightmare” call. Reddit user “txmadison” says that Comcast pays people in the “retention” department based on the number of Comcast products the reps “save” during a termination of service call:

“When you call in to disconnect, you get routed to the Retention department, their job is to try to keep you. The guy on the phone is a Retention Specialist (which is just a Customer Account Executive who takes primarily calls from people disconnecting their service.)

If I was reviewing this guys calls I’d agree that this is an example of going a little too hard at it, but here’s the deal (and this is not saying they’re doing the right thing, this is just how it works). First of all these guys have a low hourly rate. In the states I’ve worked in they start at about 10.50-12$/hr. The actual money that they make comes from their metrics for the month which depends on the department they’re in. In sales this is obvious, the more sales you make the better you do.

In retention, the more products you save per customer the better you do, and the more products you disconect the worst you do (if a customer with a triple play disconnects, you get hit as losing every one of those lines of business, not just losing one customer.) These guys fight tooth and nail to keep every customer because if they don’t meet their numbers they don’t get paid.”

3. Block Is a Frequent Guest on ‘TWiT’

Ryan Block is a frequent guest on “TWiT,” or “This Week in Tech” as it is more properly known. TWiT is a podcast hosted by noted tech expert Leo Laporte. According to a New York Times article, Laporte’s various TWiT programs and podcasts are downloaded a combined five million times per month.

You can watch an episode of TWiT featuring Ryan Block in the video below.

Block’s wife is Veronica Belmont. Belmont may be familiar as the host of the pre-show and post-show programming for BBC America’s broadcast of the Doctor Who 50th anniversary special. Her first short story was published last month. You can see the anthology the features her short story right here.

5. He Once Cost Apple $4 Billion With a Bogus Leak

The video above features both Block and Belmont (along with Patrick Norton) chatting about the iPad.

The recent kerfuffle over Block’s recorded Comcast call proves he has the pull to generate a powerful tech story on his own. But that level of tech influence isn’t new. Back in 2007, Block was involved in another story that proved his level of influence.

On May 16, 2007, Block posted a leaked internal email from Apple on Engadget. The post “revealed” that the iPhone and Mac OS X Leopard would both be delayed. The memo was later shown to be a fake. However, based on just that one news report, Apple’s market cap took a $4 billion hit. Block regretted this incident and explained how it came to pass in a blog post:

A number of Apple employees received an email that appeared to be from Apple corporate reporting that the iPhone and the next version of OS X had been delayed. An Apple employee who we trust then forwarded this email to us. They gave us absolutely no indication that its origin might be in doubt…

About an hour and 40 minutes after the initial memo went out, a second memo was sent to the same internal Apple lists, dismissing the first. Soon after, our source — who we’d been in contact with through the morning — let us know that Apple was dismissing this earlier email; the second memo passed off the first as ‘fake’ and ‘not from Apple.’ 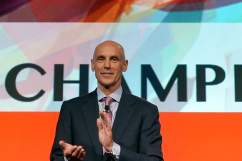